Pilaf yes but ... with what is there 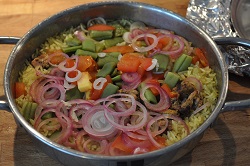 The next day a nice barbecue in the garden with many beautiful pitasouvlaki, despite the gluttony, I had to give up the last two skewers ...

And so I decided, instead of reusing them as they were the next day, of recycle together with the remaining decoration vegetables, for the preparation of a nice pilaf of rice and vegetables;
without forgetting a little touch of exotic flavor given by a curry grip.

The preparation is the classic one of pilaf, repeatedly described in these pages; from the simplest to the richest.
Let us also consider this as another variant, albeit a little canonical as it was based on what was still to be done outside in the kitchen!
And besides, there is always the satisfaction of creating, from a couple of things left behind, a completely new dish!

In addition to the two skewers and vegetables for pita, there were already cooked green beans in the fridge; even those are finished in cauldron.

Measure the rice and wash it carefully until the water is clear: this is an important operation because it eliminates all those small traces of starch that would make the grains stick together.

Slice the onion and brown it in the oil over low heat until it is completely undone.
In the meantime, heat some vegetable broth and add a pinch of curry.

As soon as the onion is ready, add the rice by raising the heat and toasting it well, as in the preparation of the risotto.

Mix the meat and the vegetables into small pieces together.

Add all the broth, boiling, and stir for a moment.

Cover the rice with the mixture of vegetables and meat, without mixing, and then, before covering, cover with aluminum foil to help keep the pan tight.

At the end of cooking, shell the rice quickly and mix the sauce with a fork.
If it is slightly damp, let it rest, uncovered, in the oven off for a couple of minutes.

Now the dish is ready to be served on the table directly in the pan (or in the pan if a large quantity has been prepared).

And here is our improvised pilaf with which it had remained from the day before!