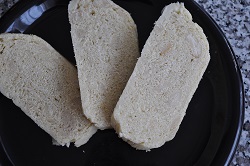 When in August 2013 cycling the Elbe cycle path, on the route between Prague and Dresden, in one of my many rest stops I stopped for a beer and a snack at the Penzion Hofmannu of Dedibaby, managed by Mr. Jan Simak. Seeing how interested I watched his preparations for avvventori, invited me into her kitchen to show me how prepared the knedlík, Bohemian dumplings.

I could not fail to mention carefully ingredients and recipe that reminded me, the latter, cooking Chinese Baozi!
As soon as I got home, I repeated it by making some small variations, mainly replacing half of the durum wheat semolina with an equal amount of manitoba flour.

What follows is my version: those who have tried found it excellent.

Pour and mix the flour and manitoba flour in the planetary; crumble the yeast and mix it with half of the water (just lukewarm) the sugar and two CT of the mixed flours.
Allow 10 '/ 15' to rise in a warm place and pour into the mixer, gradually adding the selected fat, the remaining water and, last but not least, the salt.
Stir until the dough is detached from the walls of the container; at this point put it to rise, covered, for an hour: it will double more or less volume.

Meanwhile, cut stale bread into cubes.
Once the leavening time has passed, knead the dough by hand, also incorporating the cubes of bread. Form a rough cylinder and allow it to stand covered for another hour.

Place the cylinder leavened in a container for steam cooking and cook over boiling water to cook 15 '/ 20.

Cut the dumpling into thick slices and ...

... To accompany dishes with a lot of sauce (stews, goulash, braised, or, as in the photo, with a mushroom sauce!)