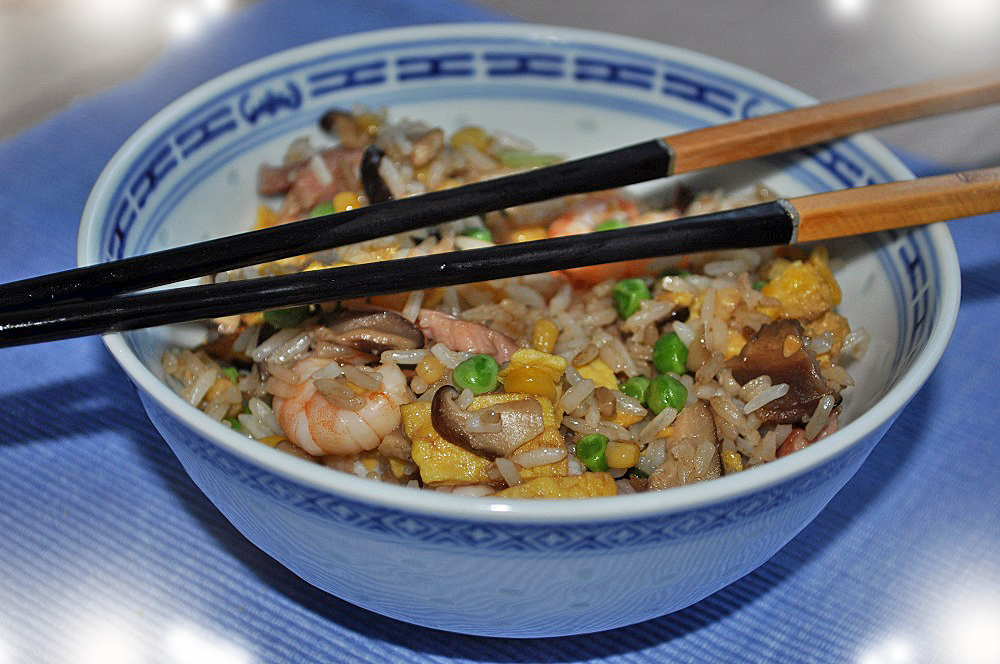 Thinking of Chinese cuisine without immediately imagining a colorful Cantonese rice is almost impossible ... in the West it has now become one of the symbols of this cuisine; although it is perhaps more famous here than in the East.Whether served as an appetizer, as a quick snack or as an accompaniment to main courses, it will never fail from the table.

For the series China is the kitchen Here is another recipe that I had prepared for the last lunch with friends on the terrace, the first Sunday of autumn.

But I've tried with shrimp and, sometimes, with some delicious fried meatballs in a light batter. There is also a version of sweet and sour sauce, light and fits with fish or shrimp in batter, made with lemon.
This traditional version, very simple, so you prepare:

Cut into pieces of fairly similar size pieces of chicken, then speziarli with soy sauce, five spice, salt and pepper. Let them flavor and beat an egg with an idea of ​​soy sauce and salt.

Cut into squares about a centimeter from the side the pepper, the onion into rings and more or less like the pineapple slices pieces.

Heat the oil in a pan, pass the chicken pieces in the egg, shake them and pass them quickly into the cornstarch. Scroll them again and ...

... dip them a few at a time in very hot but not boiling oil until they become crispy. let them drain on kitchen paper (or an old bread bag ...) and then keep them warm while ...

... Fans will jump in a little oil in wok vegetables and then the pineapple. If desired, this dot in even add a half cup of peas just thawed: fans so much color!

Pour the ingredients for the sweet and sour sauce, previously mixed into a glass, and pour them over the vegetables.

Immediately add the fried chicken pieces and stir until the sauce just begins to set.

Bring to the table in a previously heated tray. Accompany with bai fans o Cantonese rice.