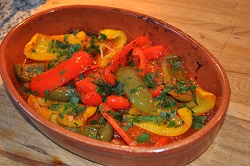 The peppers are one of my passions and I put it on the table in any season.
I have mine recipe, tested ( and "light", too), that I've been always preparing.
And I have a version, more summery and crispy, that I reserve for summer: baked in the oven

With peppers of every color and only a small onion despite my habitual generosity with onions.

I wrote crispy because, with this cooking and leaving the peppers into slices big enough, even when you get them to the table they they are still firm to the bite:
they are fantastic even to stuff a sandwich...

Sure I use it typically as a side dish; rather, I try to do it: because it just comes out of the oven is tempting to take him out to forkfuls and pieces of bread!

A good pepper pan is also characterized by the spices that add flavor: here takes pride thyme, caught just before in the garden (but also grows well in a pot on the balcony ...) and used without covetousness!

And now, starting as always from the ingredients, let's start cooking!:

Preheat oven to 180 °, in the time that the ingredients are clean and in the pan will be right temperature.

Cut into thick slices peppers, remove seeds and white parts, wash them well and let them drip dry a few minutes.
Clean an onion and then slice it into rings the thinnest possible
(In cooking should almost disappear).

Mix them in a pan along with thyme, oregano, extra virgin olive oil, salt and pepper.
If you also like to add a pinch of paprika and, for those who like spicy, like me, also a chili.

Holding, for now, from the tomato pulp and sugar.

Bake for half an hour.

After this time, remove from the oven briefly to finish with the chopped tomatoes and a pinch of sugar.
Then mix well and put in the oven for ten or fifteen minutes:
to me the overcooked peppers that they tend to get rid of do not like, so I generally do not go beyond this time;
moreover, if you wanted to prepare the peppers in advance and heat it before serving, it might start to overcook.

Serve it seasoned at the moment by a generous handful of parsley (I actually use the burnet but ... not everyone in the garden or on the window sill has it!).

It is excellent served right away, just out of the oven; but also warm or cold, maybe the day after, if by chance he were advanced.