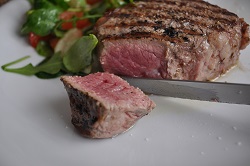 it's at the plate or on the grill as in a beautiful heavy cast iron skillet,

the important thing is that it is cooked as simply as possible and without errors.

Just recently, for that matter:
a slice of four centimeters and a thick beef marinade at room temperature with the aromas which more are preferred.

Just be in minimal amount.

At least one hour before cooking, remove the meat from the fridge. slightly affect any external fat but avoid cutting the meat.

Season with half a squeezed garlic clove, a pinch of oregano, very little red wine and some good olive oil.

Let stand at room temperature by turning a few times.

Bring to a temperature of 100 ° warmer and put the dishes which will be served paved.

If you use the electric grill must be regulated to the maximum.

Place the slices on the hot grill and, if you use an electric grill, close it holds it up at least one centimeter from the top of the meat.

Turn it over after two minutes and cook it for a maximum of two minutes on the other side.

Then wrap well in aluminum foil and let it rest in the warmer (now shut down) for five minutes.

Remove the cobblestones from aluminum, lay it on the hot plate and season with fleur de sel (sea salt or, in the absence of other ...), freshly ground black pepper and olive oil.