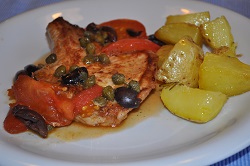 Tired of the usual pork ribs stir-fried or on the plate?
We just have to try one of the pork chops version with a completely different flavor than usual.

Few ingredients with an intense flavor to create, without covering it but enhancing its aroma, the aroma of the pig.

It may seem strange that so many of the ingredients can marry so well with the dominant flavor of the pig but the result is surprising:
a dish that is prepared quickly and that like always.

Here I presented it accompanied by some roast potatoes but it is also perfect with a simple salad or green beans in oil.
There is nothing else to say, the rest can be added to you after preparing it as I do!

Heat oil in a frying pan and season with a clove of garlic peeled and freshly crushed with the back of a knife blade.
Also add the anchovy fillet into small pieces and, while still is melting, begin to brown the pork chop.

Add it to the rest of the ingredients (you want to replace - as in the pictures - the tomatoes with some tomato slices) and cook over medium heat for a couple of minutes.

Salt and pepper, season with oregano and sprinkle with white wine.
Turn and cover the pan.
Continue cooking for another five minutes at least.
Remove from heat and let rest a few minutes discovered in the pan.

... Accompanied by a side dish of your taste.