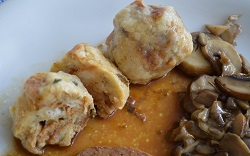 When at home the basket for leftover bread has become too full, from Trieste to Prague (and also very well by now) the first solution that comes to mind after the breadcrumbs, called dumplings: dumplings.
They come in all types, size and taste; much also depends on what else is in the house in addition to the dry bread!

What is described here is a basic preparation, with minimal or almost of possible ingredients. To each, according to the tastes and destination of the dumplings, the addition or absence of other components.

Cut the bread into small cubes, sprinkle it with the milk without soaking it (I personally start by adding a small quantity of milk and then mixing with the hands - as needed, then add all or less the remaining milk). Keep it half an hour aside to rest, preferably in a cool place.

Squeeze the bread to remove excess moisture and gradually add the eggs, salt and pepper, nutmeg, onion, chopped finely and previously browned in butter, parsley and flour; as described above for milk: it may not serve all the flour, adjust as needed.

Mix everything with your hands and, if the dough is really too moist, adjust the flour or even breadcrumbs.
Form a ball and let rest in a cool another thirty minutes.

Form, with moistened hands, into balls the size of a large plum (v. Note).
Whether they were very sticky, dry them in the newly composed flour.

At this point, immerse one at a time, with the help of a skimmer, all the dumplings in broth brought to a boil and kept alive enough to just continue to simmer.

When the dumplings rise up, drain them with a skimmer and place them on a serving dish or directly in the individual dishes.

These basic dumplings are an excellent side dish for meat or vegetables with plenty of sauce.
Generally they can be an excellent alternative to many dishes in which it is planned to accompany the polenta.