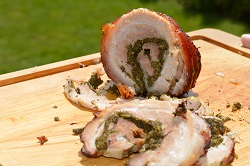 Porchetta is a wonderful dish but, given the size and weight of the original recipe, you have to find alternatives for smaller versions, if you do not expect to have at least twenty people for lunch!
The bacon in pork is a great solution!

The preparation may seem long and complicated but, in reality, it takes more time to describe it than to make it ...
The important thing is to get the butcher a nice piece of fresh bacon with still attached the cote and have at home, this is essential, a good amount of fennel: I have a beautiful plant in the garden but, years ago, I got it in season and then I stored it in bunches in the freezer.
The other ingredients are they always present in the kitchen; here they are along with everything else.

First of all, put all the necessary ingredients, including string, on the work surface: it is better not to find yourself running to look for something at the last moment:
it's a weekend dish and here, at five o'clock on Saturday, the shops close ...

Lay the piece of bacon (I indicated a pound: OK abundant pound, so as not to exceed three pounds) with the whetstone on the work surface and affect the meat diagonally in both directions; then sprinkle abundantly with salt and then pepper.

On the chopping board, mince the rosemary, the chilli and the fennel, reserving the largest stalks for the next phase.

Mix all the aromas together and spread them on the meat, making a slight pressure to adhere well.

Then roll the pancetta carefully and firmly ...

... and tightly tie it: I stop it first with silicone stopper (not suitable for cooking on the flame...) and then tie it tightly with the string from the roast.
Then wrap it in aluminum foil and leave it in the fridge to rest and flavor for the night.

The next day heat the grill to 200 ° (see note 1), Put the meat on the spit and cook with indirect heat, for about two hours.
You can safely evaluate the cooking of the meat with a roast thermometer: when the inside temperature is about 85 ° the pork will be ready.

It is advisable to prepare the meat at an early hour and, when cooked, let it rest near the grill, wrapped in aluminum foil, for an hour: it will be easier to slice it later (see note 2).
Serve it sliced ​​in dishes or on a tray; the ideal is to eat it between two beautiful slices of bread, if you can give up a knife and fork!