Chef's hats to the sea filling 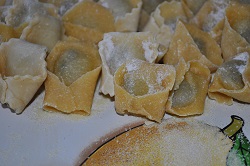 The stuffed pasta, even the most refined, all have their origins, in the end, from the imagination in re-using and re-presenting under a new aspect what has remained of the preparations of the day before.
Why not?

like these toques prepared with stuffing left over from the preparation of a dish stuffed squid!

Not that then the great traditional dishes are made with leftovers:
now the classic stuffings have their own procedure and coding from which they can not be missed.

But in the home kitchen everything is permitted.
The important thing is that it is good and genuine.

And I think those who read me know for some time that here to me it is sensible to everyday kitchen suitable for all homes.
Even if some help, as a kneading quality and a classic machine rolling dough, always comes in handy!

Here's the procedure here and the ingredients for my toques the filling of the sea!

Speaking of precise quantities is impossible: it depends on how much stuffing is advanced and how much it is fixed up with the addition of another breadcrumbs and parmesan!
For the egg pasta I set myself preparing three eggs and three pounds of flour (including a third of semolina).
With the advancing one, depending on the moment, you can make tagliatelle or thin fettuccine.

After preparing the egg pasta as per prescription, put it to rest in the fridge and prepare many balls of stuffing.
If you make the pastry squares little ones even the balls must be of adequate size.
If you opt for the size of tortelloni, then you can abound.

I generally use the stencil (the raviolera"...) Suitable for preparing the triangles of dough stuffed (excellent also to prepare tortellini, if you want to save time and effort).

Pull the dough with the machine until the minimum thickness, place it on the raviolera just floured and sink it into the recesses for the stuffing with the fingertips.
Place the balls in the grooves and crush them well to distribute them completely.

Cover with another sheet making it adhere well, first with your hands and then with a rolling pin.
Turn the grabs over on a towel and separate them immediately with the cutter wheel.
Flex it with the form that you prefer before they begin to dry out.

If you want to keep them open, delta, it is not necessary to separate them at once: when they dry will separate smoothly along the incised lines.

Let them dry at least a couple of hours so that they take the form.

Cook them in salted boiling water: the cooking time varies from eight to eleven minutes, depending on how much it has left them to dry, and the sheet thickness.

Drain and dress them: here, in the photos, they have been seasoned with a simple sauce of tomatoes and basil.

They're not so advanced!