Pasta with sardines, to Palermo 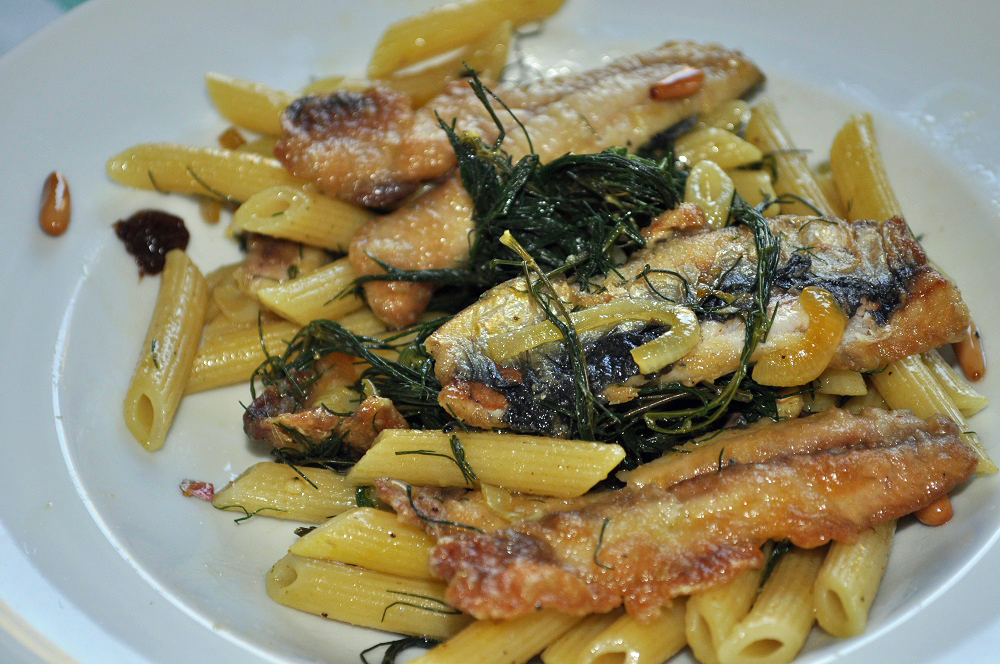 This great Sicilian dish, sunny, colorful and tasty makes you immediately think of Sicily, from where it arrives. But it is also a dish whose flavors recall those of Middle Eastern cuisine: after all in Sicily the Arabs passed by.

I know that by publishing this recipe I will draw a lot of criticism for not perfect adherence to tradition but it comforts me that a Sicilian lady, just seeing these photos, wrote to me that you think that my version is almost better than her!
However you prepare is a dish that requires a bit 'more effort than many other recipes. But the result is always guaranteed. This my version, I prepare for some thirty years, he is loosely based on that reported by Buonassisi in one of his pasta code. I had an old copy still typed and repeatedly pinned by hand: I finally decided to write it down.

It is not a pasta that can be prepared in all seasons, alas: I find the beautiful sardines here only in the summer and the fennel in the garden as well!
It is true that it can be frozen and that sardines, even frozen, can always be found; but, in my opinion, it's not the same thing.

Checked that all the ingredients are on hand to start soaking the raisins in warm water. Sauté in a little olive oil, pine nuts and set aside. So desalination, disliscare and now hosts four threads from anchovies.
Clean the sardines, fill them and keep them aside.

And here begins the actual preparation, which requires a minimum of coordination and timing! Boil plenty of water and brown the onion in a pan with four tablespoons of oil (about 40 gr 100). In the meantime, just boil the water, salt it and cook the fennel cleansed of the hard parts: because it is cooked and soft but not defeated, it takes about twenty minutes.

As soon as the onion has started to brown, melt the fillets anchovy and then add the raisins, pine nuts and a sachet of saffron. The flavors will have to mix very well, then continue cooking on a very low heat.

In the meantime heat the oil for frying the sardines in a pan adding another saffron bag; flour the sardines and fry them, a few at a time, then put them to drain on a paper towel. As they are ready, keep them aside, perhaps in the chafing dish.

Drain the fennel with a perforated spoon and cook the pasta in the same water. And here, now, the times are tight ...

Add the fennel to the pan with the dressing, mix and complete with a quarter of the chopped fillets of sardines, continuing to mix.

Drain the pasta al dente and add it to the frying pan now well over high heat; pour the rest of the sardines, let fillets, stirring for a few minutes with a lot of care not to break them.

At this point the dough is ready: it is served in the frying pan if you are among friends; or in large tray previously heated.
Bon appetit!