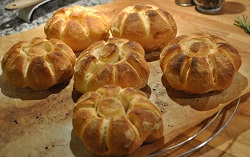 Although I often prepare bread at home, it is always about a kilogram of weight. For some time I had decided to prepare also the mythical Milanese michette, those blown, because I do not find them here!
Those michette that many years ago, early in the morning were delivered still warm and crisp front door of the house from the baker's boy.
Those michette today, also in Milan, are no longer so easily.
Alas, replaced by humid and rubbery industrial products that have only, and remotely, the appearance of the michetta.

Of course, preparing michette is not as simple as it seems: I began to consult manuals, read articles and consult blog. Each had its formula; but I must say that everyone agreed, for home preparation, on tagliamela for the typical petal forming of the michetta! And also about the fact that one is needed for this preparation Biga to prepare almost a day before.

For professional preparation you should start from a compound chariot, compared to a quantity of 100 strong flour (type Manitoba), 35 of water, 0.1 of malt and 1 of yeast. After leavening for 16 - 20 hours, this biga is mixed with a quantity of 20 flour (always Manitoba), water (QB, varies according to the quality of the flour and the humidity of the air - on average 25 - 30) and 5 of salt.
And here the problems begin because, for example, also my mixer MUM80 which has a nice 1'600 W engine would still have to fight with a decidedly hard dough ... and then, after, the final dough would be passed several times to the cylinder, a kind of Grandma Duck giant!

In the end I adjusted by increasing the amount of water to 40-45 to facilitate the mixing and replacing the malt with honey for the preparation of the biga. For the final dough I slightly decreased the measure of flour to 10-15 and replaced it with a normal 00 flour. With the strength of my arms and the skilful use of the rolling pin I remedied the lack of cylinder to browse the dough!

And in the end all these studies, attempts and experiments (in the privacy of my kitchen) have proved a success; Also according to my neighbors who got to taste my bread rolls freshly baked!

A very important warning: this is not a quick preparation. It takes time and patience, like a pastry, for example. If your baker is a real baker, keep using his michette!

The following, complete with ingredients and photos, is my version.

Dissolve the yeast in the water (I also add the yeast that helps a lot in the long rising) together with honey.
Add it to the kneading flour until dough is smooth: just a few minutes, maximum ten.
Put the dough to rise for at least sixteen hours not in a cold environment and protected from drafts (the best solution is one ciotolona leavening machine with lid).

For the final dough:

Pour the chariot into the mixer and mixing, add the flour and, if necessary, water; the water must be added for a short time.

Knead for 20'-30 'at medium speed: the final dough must be dry but soft. Collect it into a ball and put it to rise covered (or in the lievitatrice) For about ten minutes

Now the dough is ready to be passed to the cylinder substitute: then it is rolled out not too thin (v. following photos) with the rolling pin on the floured surface and fold it for the long in four. First the two sides towards the center and then on itself.
It gathers into a ball and let stand again covered for a few minutes.
In the absence of a lievitatrice can be wrapped in plastic wrap.

Repeat the peeling and resting a couple of times, grease the ball with a little oil and, always covered or in the lievitatrice, Let rest half an hour.

At this point, weigh the dough and divide it into equal parts, no more than eighty grams each (otherwise it would be too large michette!)

Shape each piece into a ball, flatten it with your hands and then fold it back on itself from the four corners; collect the joined flaps with your fingers and turn it upside down to gently form a ball with your hands that will contain a kind of cavity inside; it does not matter if it is not seen and if it sticks, it will no longer be mixed and will remain, even if invisible. Gently form a ball and repeat the operation with all the pieces of dough.
Cover the balls breaded with plastic wrap and then with a cloth to avoid sudden changes in temperature and let rise for about half an hour.

Once this leavening period has also passed, form the typical shape of the michetta with the tagliamele: flour it and press firmly but without cutting the dough completely (after two or three attempts you are no longer wrong).

Turn it over (to let it grow without the cuts come together free brewing up ...) and repeat the process with all the dough balls.
Cover with plastic wrap and a cloth and let it rest for about an hour.

Enter (if you have) the refractory stone floor in the oven and heat it to at least 250 ° (personally I bring it first to 300 ° with the function pizza - at least my oven has it - to heat the refractory surface well; then at 250 ° to cook). Boil some of the water with which at the time of cooking a bowl will be filled in the oven to create steam.

When the oven is ready and the rest time has elapsed, place the michette again with the cuts upwards on the shovel with parchment paper on top (in the absence of the refractory surface on a baking sheet covered with parchment paper), wet them slightly with the steamer (such as one that is also used to spray the leaves of the plants or the linen to be ironed ...), Pour the boiling water into the bowl of the oven and start baking.

During the first five to ten minutes of cooking, steam the water several times in the oven to maintain the steam and promote the formation of a crispy crust.

As soon as the bread begins to brown, but not for ten minutes, lower the oven temperature to 200 °. The total cooking time varies, depending on the oven and on one's personal experience (I never tire of repeating it: each oven has its own character and its own history!) From 15 'to 25'.

Churn michette on a wire rack to cool them and eat them as soon as possible: I love them with a slice of mortadella.

In any case, a good michetta can also be reused the following day: just wet it on the surface and leave it in the oven at 150 ° until it is dry and crunchy on the surface; it will not be perfect as freshly baked but always better than certain precooked products that are on the market!