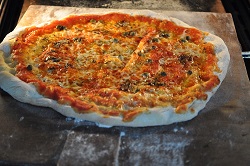 As I promised at the time, describing the various basic dough for pizza, here is the description of my (now old and disused) usual mixture.
With this, as you can also see from the photos, the pizza is always good, provided you cook it not only in an oven at maximum temperature but also accompanied by a in refractory!
As I explained in the entry about it (refractory), you can use a typical Umbrian text or one of those plans on the market; possibly also those suitable for garden grills.

For leavening, in addition to the normal freeze-dried yeast, I also add a sachet of natural yeast (you can also find this in the supermarket, in general); it requires a fairly long second leavening but guarantees excellent results. But if you are used to the leavening method you can continue to use that.
As for the flour I prefer to use, if I have it at home, also Manitoba, it has a higher gluten content which favors bread making.

I think then that recommendations such as not to add salt to the yeast are useless!

Serves four pizzas from about 200 grams of dough:

The ingredients do not indicate the toppings: after all, even a white pizza, seasoned only with oil and salt, works very well with this dough!

Weigh and mix in a bowl the flours. Prelevarne about one hundred grams and mix them in a container with sugar, water and yeast. Store it in a warm place to ferment for about ten minutes.

Pour into the mixer the rest of the flours and mix them with oil and salt.

As soon as the yeast is ready, add it to the bowl of the mixer and mix on medium speed for about ten minutes. The dough will be ready when it detaches perfectly from the walls of the mixer while remaining moist and soft.

Of course it can also be kneaded by hand, on the kitchen counter; it may take longer for the dough to reach the right consistency.

Let dough rise, covered, for about an hour in a warm place (possibly use a container for leavening).

After about an hour the dough will have doubled in volume. Knead it by hand for a couple of minutes and divide it into four loaves that will be left to rise again for one to two hours, until they are doubled in volume again.

At this point, roll out a loaf by hand on a floured surface, turning it often, flour it and rotating it until you get a disk of about thirty centimeters in diameter (more on my pizza shovel would not fit anyway!).

Slide the floured paddle below the disk and then garnish to your liking; for example distributing the tomato puree with a spoon and in a circular motion and then adding salt and oregano and any other seals (pictured: capers and chopped anchovies). Cover with mozzarella into small cubes and then with a thin trickle of oil, leaving him to run off with spiral motion from the center to the outer edge.

Slide the pizza on the in refractory already very hot oven.

Depending on the temperature of the oven with this system the pizza will be ready between three and five minutes.