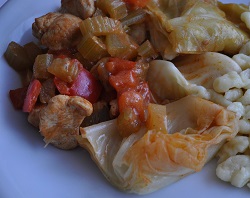 My passion for goulash could not be limited by the needs of light cooking, low in fat and calories!

Therefore I could not help but include a version LIGHT of this dish.

The quantity of meat, limited, is balanced by the presence, dominant in this proposal, of these segments of cabbage.

The quantities of vegetables indicated are the minimum quantities.

Believe me, if you want to abound with celery, cabbage and pepper, do it without fear: these ingredients will not grow fat and calories in the pot!

Unfortunately, this time, the desire to experiment and put it all together was superior to that of photographing the preparation step by step.

I will remedy the next return to the table of this dish: it was too much
(and the light kitchen season to the bitter end is still long ...).

Clean the pepper and remove any seeds; clean the celery and cut both into cubes.

Clean the cabbage and divide it into three large cloves.

Cut the chicken meat to mouthfuls similar enough and season with chili pepper, kümmel, salt and half of the lemon peel.

Sauté the chicken and vegetables (excluding the cabbage) for a few minutes over medium heat with olive oil.

Add the peeled tomatoes and the hot stock.

Put the cabbage over it and let it simmer for a quarter of an hour.

In a bowl mix the yogurt with the flour and coriander.

Remove the cabbage and place it on the plate.

Gradually add the yogurt mixture to the goulash, raising the flame to the maximum in the meantime. Bring to a boil and then season with pepper and salt to taste.

Pour the goulash on the cabbage wedges and complete sprinkling with the rest of the lemon zest.