Rolls of plaice with spinach
(a "light" recipe) 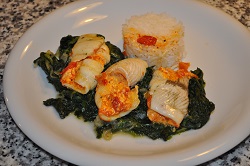 Sometimes it takes very little to make interesting and unusual a normal plate of fish: in this case it was enough to enrich the plaice rolls with a compound of Peppers cream e strained yogurt.
A bed of spinach, then, completes the whole.
I used for the preparation of plaice fillets, but any other flatfish, such as dab, would be fine; if even it is frozen. It is important that they are large enough to be rolled up on themselves. Two or three fillets per person are about two ounces.

For the cream of peppers I use the aivar or cream of peppers Here it is found almost everywhere; there are also similar Italian products perfectly suited. And yogurt cast can be replaced very well by a cream type philadelphia.

Typically for these quite tasty dishes one baifan It is ideal: it is therefore advisable to immediately cook the rice.

Take the already cleaned fish fillets, pepper them lightly and coat with a mixture of pepper cream and yogurt cast. It is important not to salt the fish. Then roll them on themselves.

Slice the onion and put it in a large non-stick pan. Add the frozen spinach, cover with 75 cc of water, cover and bring to a boil. Every now and then stir to facilitate the cooking of the spinach. Cook until the spinach is completely defrosted.

At this point move them to one side of the pan, add a cup of oil and put the rolls to cook for about five or six minutes over medium heat and covered pan.

Arrange the spinach in the dish, add salt, place the rolls on top and complete the rice on the counter.