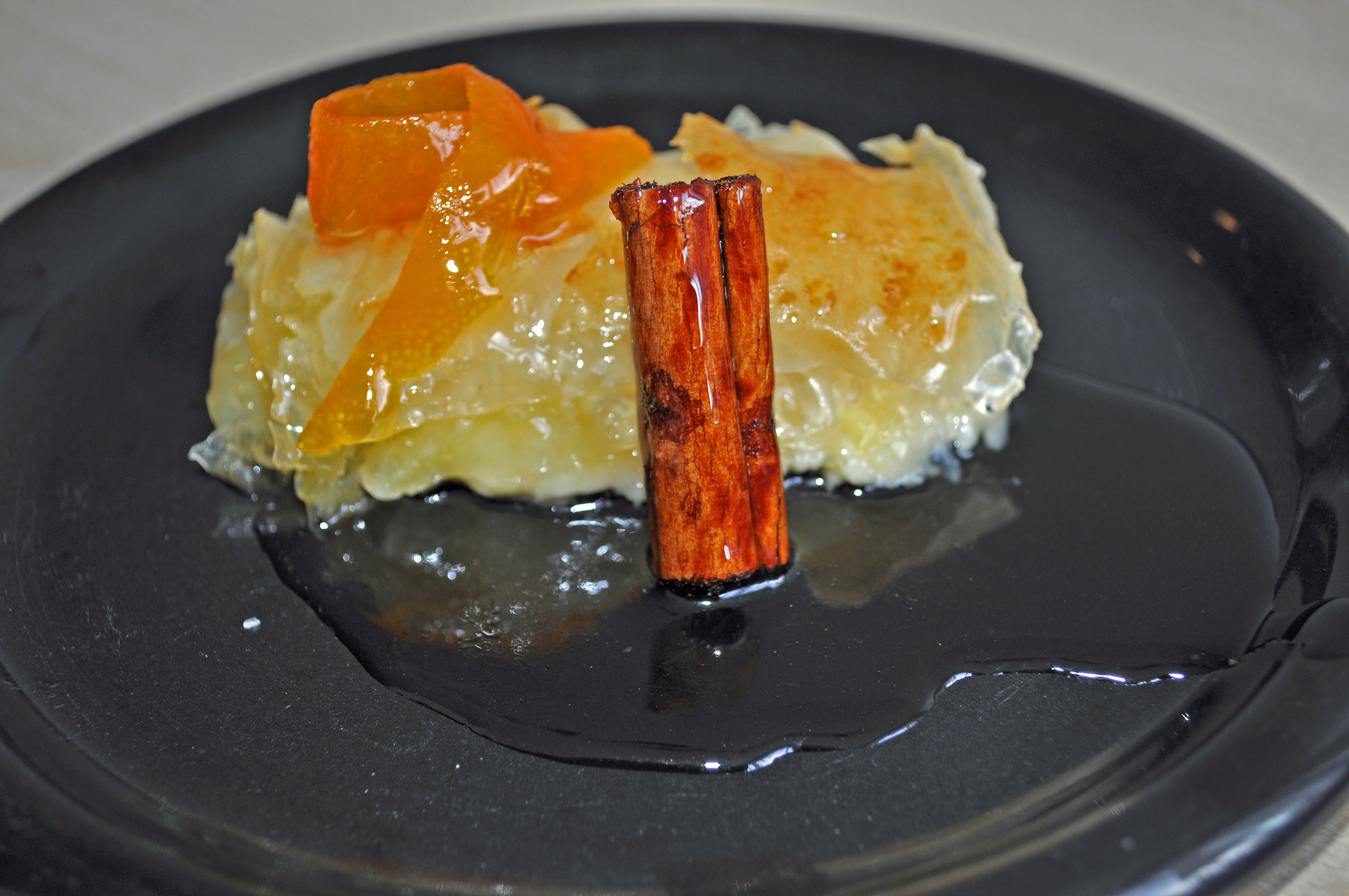 When I'm in Crete on vacation, always in the same town halfway between Chania and Rethymo, I often end up at a local pastry table (the ζαχαροπλαστείο) to shame, without shame, a nice portion of galaktoboureko.

A bomb of layers of phyllo dough stuffed with cream, baked in the oven and then sprinkled, without restraint, so much, much syrup!

I think it is clear to everyone that, having returned from vacation, to eat it I do not wait for the next holiday ... and in fact, even if in a somewhat simplified version, I would like to prepare it at home too; but in moderation, never more than once a month.

Just to keep it light, I replaced the typical semolina cream, which includes plenty of egg milk and anything else, with the semolina cream that I also use for apricot strudel and, sometimes, for my puffs svelte. No milk but ricotta and a minimum of egg.

The result, in my opinion and that of my guests, is excellent; I certainly wouldn't fool a Greek but ... it's worth trying!

So, starting as always from the ingredients, let's start cooking!

For a good result of this recipe we start from the end ... that is from the preparation of the two components that will complete, one before cooking and one after, this dessert: the cream and the syrup!

Bring the water to a boil in a saucepan; add a pinch of salt and little by little the semolina continuing to mix.

As soon as it is well mixed, remove from the heat and place in a bowl; add the well sieved ricotta, the icing sugar, the vanilla and the egg.

Stir until obtaining a homogeneous cream and keep it in the fridge until it is ready to use.

Mix the sugar, honey, juice and orange peel and a cinnamon stick in a saucepan.

Cover with water and cook until the desired consistency is reached.
Keep in the fridge until the baking of the cake is finished.

Now you can move on to preparing the actual cake!

Melt the butter in a small saucepan, brush a baking dish lightly and place the first sheet of phyllo dough so that the edges protrude from the pan, brush it (in moderation!) of butter and add another sheet.

Repeat until a four or five layers are formed.

Take the semolina cream from the fridge and fill the base of filo pastry well.

Fold the protruding edges of the filo pastry over the filling, scraping them off (well here!) of butter.

Cover with other sheets of filo pastry, always brushed with butter, making them penetrate well between the edges of the cake and those of the pan.

Finish with a last brush of butter.

Now with a knife engrave the galaktoboureko in order to create what will be the final portions.

If necessary, if the surface does not appear well oiled, add more butter.

Take the syrup out of the fridge and use it to sprinkle generously (very generously!) The galaktoboureko.

The dessert is ready to be served!

(the decoration was made for the photos, the orange peel and the cinnamon stick are there only for beauty!).

I think it's clear that it's not a sweet dietary or line friend; but it's really good ... so:
bon appetit!