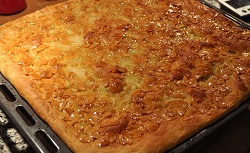 The cakes based on a leavened dough, like the Bienenstich or Sweet focaccia already seen in these pages are very widespread north of the Alps;
they are very different, despite having in common the brewer's yeast (or the yeast, if preferred) from panettone and pandoro, as well as from the babà:
in fact, here the dough, well laid out on a baking sheet, serves as a support for a more or less rich garnish.

I define them in general sweet focaccia; and in fact, as a focaccia can be garnished only with oil and salt or with a richer decoration (onions, olives, tomatoes, etc.) these can also go from a simple topping of butter and sugar to almonds, fruit and other delicacies.

As the focaccia, once ready, can be further stuffed, even these cakes are suitable to accommodate various types of creams, from a simple custard to other more elaborate!

Certainly it takes a little more time than for a quick cake, but only for waiting times after the first and second leavening.

For the rest, the procedure is similar to the preparation of a normal soft focaccia.

And now, starting as always from the ingredients, we begin to dedicate ourselves to this dough!

Melt the butter in a saucepan and then add the milk, remove from the heat, stirring well.

Mix the flour with the lyophilized brewer's yeast and begin to mix in the mixer at low speed adding the milk with melted butter, then the sugar mixed with the vanilla and the egg.

Stir at medium speed for two or three minutes and then add a pinch of salt.

Continue stirring for a couple of minutes at a time and then put the kneader at maximum speed for one minute.

Cover the bowl with a cloth and let it grow, sheltered from the cold and drafts, the dough for half an hour (must double).

Flour the kitchen counter and gently knead the leavened dough giving three turns to the dough.

Even this dough, like many other leavened products, gives its best if prepared the day before and then left, after these first steps, to mature in a sealed container in the cool, for example in the less cold part of the refrigerator.

The next day it will be left to warm up at room temperature for one or two hours and then worked gently (even with a rolling pin) ...

... to be lying in a slightly buttered baking sheet (v. Note).

After a last leavening in the pan, covered with a cloth and protected from drafts, at least an hour can be decorated according to your taste.

Put the cake in the oven (static) preheated to 200 ° and cook for about 15 ': given the variability of behavior of domestic ovens, it is always advisable to check, after this interval, if the cake is well cooked.

At the beginning of this article I mentioned the recipes for a cake and a sweet focaccia prepared using this dough as a base.

But there are many other cakes that everyone can prepare as they like, for example by covering the mixture of small plums sprinkled with sugar!
(I often do it in summer).