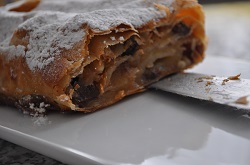 It is not difficult, the most complex thing, if you want to call it that, is the very thin roll of the dough.

It must never be used puff pastry dough !!!

Since the dough is also found inside the cake, in several layers, it would not flake and it would remain an ignoble brick of half-cooked butter!

Clearly even in Trentino and South Tyrol is in the shops of the so-called strudel pastry in which puff pastry is used, only externally, as a container for the filling ...

But that's not the same thing.

Mix together the flour, the hot melted butter, possibly with a little water, the sugar and half of the beaten egg (the other half I reserve for browning).
Sometimes I like to add a cinnamon idea to the dough, it depends on the moment!
You work for a long time, as for egg pasta, until it begins to crackle.
It is left in a cool place, wrapped in a damp cloth for a good half hour and in the meantime the filling is prepared:

the peeled apples are cut into thin slices and mixed in a bowl with sugar, cinnamon, pine nuts, sliced ​​almonds and the soaked raisins squeezed well.

The dough is spread out very thinly (to turn it you can help with a rolling pin) first on the work surface and then on a large, slightly damp cloth (for example the one used first to wrap the dough).

Then, (follow the photos is easier than explaining it ...) spread the first third of the apricot jam sheet and cover the whole with breadcrumbs possibly browned in butter
(Two crushed amaretti have an elegant feel, in addition).

Then spread the filling, leaving approx. 3 cm. and in the end about ten.

Fold the 3 cm. free sull'impasto, you grab the towel and slowly raises making roll the strudel on himself.

Helping with the canvas, transfer the strudel (the end of the dough must go under!) On a baking sheet covered with cartaforno.

It is sprinkled with melted butter and then with half a beaten egg previously reserved.
A pinch of granulated sugar isn't traditional but it's nice.