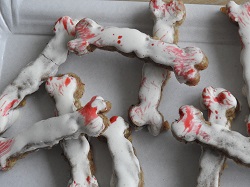 For Halloween treats, here's a simple idea, for those who already juggle with the various Christmas cookies: bones with a sweet mixture of almonds and cinnamon!

A complicated recipe?
Absolutely not: the same one I use to prepare the famous cinnamon stars, i zimtsterne.

The ingredients are few and readily available.
The preparation as described in the original recipe of zimtsterne and also in the video that I recommend you to see (video Zimsterne) is longer to describe than to be realized.

Below the ingredients in the usual amounts (I have even halved them this time).

To prepare the mixture, the icing and cooking times, I refer you to the original recipe.

And in case you do not have a little bone-shaped mold available, you can prepare it starting from a round mold with the help of a plier.

After stes the dough and made the ossicles

it is covered with glaze

and get them fired

Freshly cooked and well cooled may be decorated, if desired, with two or three drops of food dye diluted in a little lemon juice.