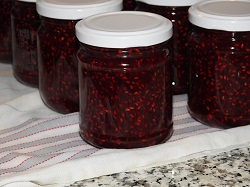 In my garden raspberries abound, from June until the end of September.

Thanks to the valid and disinterested the collaboration of the children of my neighbors in the garden advances a few for which we must absolutely find a use ...

but even so, in addition to cakes and fruit salads, we go for raspberry jam ... or, as they say to me, Raspberry Jam.

Not that in one day I snack enough to get right to lavorar of preserves; but if they collect enough to fill a bowl that is poured into a container in the kitchen freezer.
And when the container is full ... it is poured into a frozen bag in my pantry magic freezer as long as there is a fair amount;
then, you start work.

This year with those save in the last few weeks, there were two kilos left to take out.

And I began to prepare my jam favorite (after that of strawberries, however, I confess).

Here I indicate the standard quantities for a kilo of sugar even if, in the end, sugar and fruit went much more.

Starting with the list of ingredients, here is my raspberry jam!

The procedure is basically the same that I use for all jams and that I have described in detail in the article on mine Apricot jam (Here the recipe) With only two small differences:

unwashed raspberries: in my garden I don't use chemicals and, moreover, between rain and watering, the berries that grow there are already more than washed!

For the rest, the procedure is what I summarize here briefly:

the raspberries, with the addition of the peach pieces, are mixed with half of the necessary gelling sugar and then left to rest for a few hours (they must also defrost, since the bags come from the freezer!).

When the fruit is well softened, it is slowly brought to a boil and then left to cook for about ten minutes, until it begins to discard completely.

Add the rest of the gelling sugar (I personally also add a little cinnamon and vanilla: it's a matter of personal taste) and simmer for another five minutes.

Meanwhile jars and lids are sterilized and prepared on a large, well-dampened cloth and will be ready to be filled.

Using a small ladle and a wide-billed funnel (also passed in boiling water) you just have to fill all the jars and let them rest well closed, turned upside down for the first ten minutes, on the wet dishcloth.

A full cooler will be ready to be put away.
And then be reopened to spread jam on bread or, why not, fill us with beautiful tarts!