The sponge cake,
that of Artusi 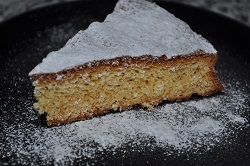 As a child I loved her very much two cakes: the tart with jam and sponge cake.
These two cakes were also the first ones I learned to bake and, until ten years later, others were not!

My mother used, as the only cooking manual, that ofArtusi  and that was it recipe that I was taught.

Today in my kitchen of home many cakes pass but, every now and then, the call of nostalgia is felt and so, like then, the margherita cake appears on the table.

As in the original recipe the ingredients are four and the proportions are always thirty grams of starch and the same amount of sugar for each egg.
The only concession is, if desired, the use of baking powder and a little grated vanilla: for vanilla it is a passion of mine and as far as yeast is concerned ... well, we are not at mastroscéff and in the home kitchen some little help always comes in handy.

Although, to be fair, when the egg whites are mounted really stiff and then incorporated gently into the dough, the cake then grows wonderfully!

Ingredients, for a 24 Ø ring cake pan:

Depending on the need, the quantities can be increased or decreased proportionately:
it will be necessary to adjust cooking times if necessary.
(for a party with friends I tried to prepare it in a large pan as the grill of the oven!)

Start by buttering a ring cake tin. Even if you cover the bottom with greaseproof paper, you should also pass a little butter on the paper (the fingers will already be greased!).
Preheat the oven (static) to 180 °.
Separate the yolks from the whites and set aside the latter.

Whip the reds with the sugar for at least five minutes with an electric whisk and then add the potato starch with the lemon zest a little at a time (and the yeast and vanilla if you have decided to use them ...).

When the dough has become a homogeneous whole keep it aside and begin mount the egg whites until stiff: it should be very firm snow.

At this point incorporate the egg whites to the rest of the dough, little by little, stirring from the bottom upwards with great gentleness: you do not have to sit!

Pour the dough into the pan and level daisy, always gently with a spatula.
Bake in 180 ° (static) and do not open the oven until the cake is ready (depending on the quantity used, from 30 'to 45').

In any case, before baking it permanently, check the cooking with the usual steccolino.
Let raffeddare, sprinkle with powdered sugar and serve!

Even the children of my neighbors confirm that it is very good.