The apple pies for all occasions! 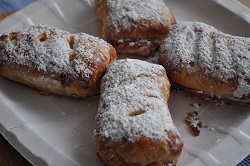 When I want to prepare something sweet for a snack but that does not require me a great commitment, that of these little ones apple pies is one of the recipes that I bake most often;
and that I have never documented step by step in the recipes even though I have exhibited the photos on several occasions.

I always say to myself: it's such a simple recipe ...

So simple that I finally decided to order the photos taken over the years and to select the most representative ones to illustrate it!
The ingredients are very few and the time required, if you use a ready-made puff pastry, is minimal.

The apples are tied and flavored with the same sauce (Here the recipe) which is used as a base for baking baked fruit pies:
but only using a quarter of the quantities indicated (then, having beaten an egg, half will be kept aside for finishing the cake...).

An apple is shown here: for gods apple pies richer to add one more (or only half).

Beat the egg for the sauce in a bowl, then keep half of it aside.
Add the other ingredients, as per recipe reduced to a quarter.
Wanting to add a little chopped almonds as of now.

Peel the apple, cut it into slices and then into small pieces and mix it with this sauce.

Take the puff pastry from the fridge and cut it into quadratoni.
Cover each square with the breadcrumbs and the chopped almonds and then distribute the apples with their sauce (not too much, though!).

Close the individual rolls, place them on a plate lined with parchment paper and cut them a couple of times.

Alternatively you can distribute the filling on half of the whole dough and then close the other half over it.
Then separate the individual sweets with a wheel cutter.

Or even cut the dough into wedges and roll them on the filling like croissants!

Whatever the form and procedure chosen, brush the apple pies with the egg set aside and mixed with a little milk.

Remove from oven, wait a few minutes and transfer with a parchment paper on a wire rack.

Sprinkle with icing sugar and allow to cool.
But they are also excellent lukewarm ...