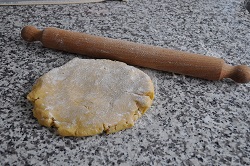 The shortcrust pastry is the basis for many desserts; starting from the more than known tart with jam.
I myself have a couple of versions very quick to prepare for different sweets, like for example tart lemon curd.

But surely the typical shortcrust pastry described by Artusi in his now classic collection of recipes, if carefully prepared is a marvel.
And it is a dough that lends itself to many uses as well as being very easy to work with.

Even in my kitchen, when I want a tart with a rich flavor and at the same time with a flavor that reminds the pies of the past, I follow this recipe (v. Note); also using lard as reported in the recipe.
Clearly it must be a very fine lard, also suitable for the preparation of pastry (for both doughs for frying).
The one that usually is sold in barattoloni pound.

For the rest, having a kneader, the dough is ready in a short time.
Here's how!

Eventually, if you really don't want to use lard, replace it with an identical amount of butter.

Having a good mixer, the dough is ready quickly: make sure the butter is well softened and that all the other ingredients are at room temperature; put them all together in the big bowl ...

When the dough begins to take on a grainy appearance it is now ready.
Do not knead over!

Knead quickly with your hands and wrap it in plastic wrap.
Store it in a cool place (in the drawer for vegetables in the refrigerator, for example) For at least half an hour.

The dough can be easily processed with a rolling pin.
In the case of cakes, cooking with a static oven at approx. 180 ° takes 35 '.