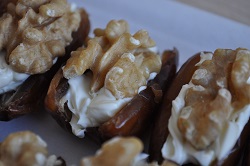 This dessert can be said of one thing:
it's as good as it is easy to prepare!

Three ingredients, a small knife and a tray; nothing else is needed.
Yet the result leaves you speechless.

Many years ago, for a dinner at my house, a friend arrived, Lia, who firmly refused to be able to collaborate in the preparation of the dishes. He entered and said: "and I prepare another dessert".
Having said that, before I could oppose it, he opened the bag and took out a bowl of mascarpone, a bag of dates and another of walnuts.
In a few minutes a tray of these stuffed dates was ready.
Despite the various delicacies that I had put on the table during the evening, at the end of the dinner that tray was empty!

Although I am a little ashamed to describe the recipe - I think the pictures speak for themselves - here's how.

Cut the dates for the long and eliminate the seed and any filaments.

Slightly flatten the date and spread the mascarpone.

Rest on the mascorpone, with a light pressure of the fingers, the walnut kernel.

So continue, until exhaustion of dates, arranging them gradually on one or more trays.

Keep cool for at least half an hour to give the mascarpone time to "suck" the sugar from the date and transfer it partly also to the walnut.