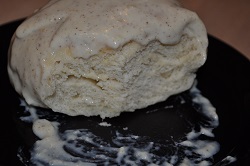 This is a very special dessert, very common in southern Germany.
So particular that it was at least thirty years that I did not happen to offer it to friends!
Until recently, a friend from Bern asked me if I could teach her how to prepare it:
He remembered as one of the most popular sweets from his mother.
I proceeded.

Given the long time since the last preparation, I dusted off my old notes (even some handwritten sheets!) From the collector of the recipes yet to be ordered and I began to compare them with a nice book on typical Bavarian cuisine and some other recipes mentioned from the internet: even for a simple recipe the analysis and comparison of different versions can be very useful.

In fact, I quickly found an important difference: the version I know of that is cooked and caramelized using as liquid butter, widespread in Bavaria to the more typical of the Palatinate that simply uses water; and with different dosages of butter and sugar.
To leave aside the versions that relate a lot to the steam preparation (Dampf) proper used in the most typical knedlik boemi.

A curiosity, the original name of these desserts is DampfKnödel (Knödel = canederli) mutated in Nudeln over time. Other very similar sweets are the Germknödel (Germ = yeast) that share the preparation but not always the seasoning.

I pause here ... I see instead what is needed to knead, cook and serve!

A small note regarding the vanilla cream: you can use a dose of a preparation for a good vanilla pudding doubling the dose of milk or halving the contents of the sachet; a cream of the exact consistency will result.

Mix together the flour, baking powder and sugar in the mixing bowl. Heat the milk just letting it melt in the butter and add to the flour mixture, mixing, together with the egg, the lemon zest and salt.

continue kneading for at least 5 'and in any case until the mixture comes off easily and completely from the sides of the bowl.

Return to rise in a leavening bowl or in a bowl covered well with a cloth for at least an hour; protected from drafts and cold shocks.

The dough will be ready for further processing when it almost doubled.

Now divide it into pieces of about a pound each and knead to form into balls that will be again made it rise, covered, for about 30 '.

When the dumplings are well leavened start preparing the liquid for cooking (v. Note): Melt in a pan with high sides (or in a large enough pan) sugar with the butter but did not let it color. Add the milk and then arrange the dumplings, side by side, in the pan.

Close the pan with a fairly heavy lid and a tight seal (the steam will not come out!) And bring slowly to a boil over medium-high heat. Lower the temperature and continue cooking over low heat. If simmering quietly in the pot for the entire cooking time, the temperature is right!

While continuing baking cakes, start preparing the vanilla cream. Mix in a saucepan over medium heat just over half of the milk with the sugar and vanilla.

Dampfnudel Remove from the pan using a spatula to detach them from semicaramellato fund (part of the formulation!).

Place on a tray with the caramelized part upwards.

Cover them with vanilla cream and ...

... Place them in individual plates. Serve apart from the rest of the cream.