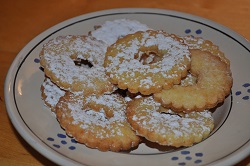 When I was little - I still didn't go to school - I lived in Milan, in Porta Romana; and a hundred yards from home there was the Grandi pastry shop, one of those pastries with an oven and an open laboratory.
Freshly baked desserts arrived directly on long counters.
Along that exposure, for my immense eyes at that time, the order was followed, indicating them gradually as pastries to be placed on the shopping tray.
I helped my parents in sorting by invariably choosing cream and African cannoli; then arrived at the disks covered with icing sugar I peremptorily requested one for myself, to bite immediately!

Today, when I prepare them, I'm not as big as then, I think ... but the taste takes me back more than fifty years.

The dough is very simple and it is the same that I use to prepare Spitzbuben which, after all, are nothing more than two-layer biscuits with jam in the middle!

As aromas I use only vanilla and lemon peel; in my opinion they are enough and it is not even necessary to exaggerate.
As with many pastries with shortbread, the ideal is to prepare them in the cold season, maybe on the patio table.

The classic version would like the dough to be worked by hand on a pastry board. But it also comes perfectly with the mixer: it will take a longer time to rest in the cooler.
Pour the sifted flour into the planetary mixer, insert the whisk for the soft dough, add the egg yolks with the lemon zest and, while it begins to knead, gradually add the sugar already mixed with the vanilla.

Add little by little the dough pieces of butter and continue stirring until dough is soft, smooth and homogeneous.

Put the dough, wrapped in plastic film for food to rest in the refrigerator for at least an hour and a half.
Or even prepare the dough the night before and leave it, having one, in the cupboard on the patio until morning!

Divide the dough into three or four pieces and begin to roll them out with a rolling pin on the floured counter. The dough should have a thickness of three millimeters. Cut 6 cm discs with a pastry cutter ...

… And then with the 2 cm pastry cutter cut the hole in the middle; then place them on plates already covered with parchment paper

Remove from the oven and place on a table covered with tea towels, sprinkling them with icing sugar while still hot.
Let them cool by touching them as little as possible: while they are hot they are very delicate.

Let them dry completely on the towels for a day, resisting the temptation to eat them immediately and then put them back in metal boxes (if they were left ...)