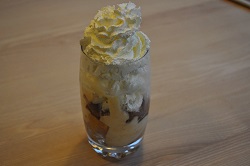 As I wrote about the Birramisù, I sometimes find myself with friends at Kapuzinerplatz of Castelseprio; and right here in early September, I happened to try a new interpretation of their birramisù, this time without coffee in the puccia for the ladyfingers, replaced instead by orange juice: thearanciamisù!
I immediately had the recipe explained to try again in my kitchen ... and the one that follows, with the addition of an orange peel, is my personal interpretation.
Beer, of course, is not lacking; but in the puccia cookies the Pils is replaced by a Weissbier while, in the zabaglione, by a dark blonde.
The result is surprising

The doses that have shown here are for four servings (four beer mugs from cl 33 - 50 cl not like the pictures!), It can be easily doubled or tripled to prepare in greater quantities.

First grate the zest of one orange to the eggnog. Then begin to prepare the zabaglione to be cooled completely ready to use: mount, with a hand whisk or electric that the egg yolks with the sugar. The cream will swell a lot. Add, slowly and keep mixing beer. Continue cooking in a water bath, stirring constantly for at least fifteen minutes; spent the first few minutes to complete with the fine grated orange zest. the cream that results must be consistent and not discard. Let it cool completely before using.

Then switch to puccia for the ladyfingers: pour the beer into a saucepan over the heat and add the sugar gradually, stirring. When the sugar is completely melted, pour the orange juice and cook until the beer alcohol evaporates.

Whip the cream very firm, adding the stabilizer to cream to keep it alight. Then mix this mixture with the spatula, zabaglione beer.
Now the cream is ready, and you can move on to the finals!

Pass the biscuits quickly in the puccia (do not have to soak but just soak), add a little caramel, place them in the jugs, cover them generously with the zabaglione cream and then sprinkle them with cocoa powder.
If space remains, repeat the operation a second time, in order to fill in the bottom of the container.

The orange can be served so, perhaps decorated with biscuits or waffles.
But certainly a worthy conclusion is serving in beer mugs and a large cream hat mounted to simulate the foam of beer!