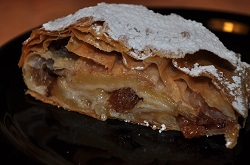 This is also a classic apple strudel; the difference is in the fact that, instead of 'classic dough, For the puff it has been used the dough "filla" (in this version that appropriate for strudel which is available commercially).

Some friends prefer this version; which of course has the advantage of not requiring a large labor for the puff ...

In practice, a return to the origins of this cake, which apparently derives from the turkish baklava, made precisely with this pasta!


First prepare the filling, the ingredients are the usual: cut the peeled apples into thin slices and mix in a bowl with sugar, cinnamon, pine nuts, filleted almonds and raisins soaked, well squeezed.

Melt the butter and stretch the first sheet of dough on a large filla slightly damp cloth. With a brush (see photo) spread it with a piece of butter. Lay on the second sheet (if it is folded dough and not rolled up, arrange the lines of the folds perpendicular to those of the first sheet. Far adhere well and still spreadable butter.

Repeat for the third and fourth sheet (the latter, however, should not be smeared with butter, but with the apricot jam for about a good third).

Then cover the whole with breadcrumbs and spread the filling, leaving about three centimeters at the beginning and at the end about ten.

Fold the 3 cm. free sull'impasto, you grab the towel and slowly raises making roll the strudel on himself.

With the help of cloth she moved strudel (the end of the dough must go under!) On a baking sheet covered with baking paper.

It turns out, is covered with icing sugar and let stand at least 30 '(depending on who is to be served warm or cold).