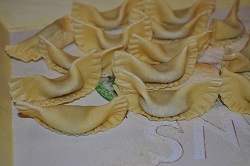 For several years I go, host of friends, to Dorga in Val Seriana, just prior to the Presolana Pass; and right there I started to like him Scarpinocc, Typical of Parre ravioli (always in Seriana Valley).

It is a paste filled with very simple ingredients but enriched by the taste of rare and precious spices, such as pepper, cinnamon, nutmeg and star anise. Served with only butter, sage and parmesan they have a special, very special taste.

The name, they say, comes from the shape which recalls that of a local footwear, made with pieces of cloth, typical of the valley. Watching them seem complicated to do but, as the first, it is to prepare them for a moment!

I prefer to use the classic pastry dough for egg pasta: always manages !. The original one would expect even the use of wheat flour, about a quarter of the dough.

Ingredients, to fill about seven ounces of pasta:

If you want to do it quickly you can put all the ingredients, except milk, in the glass of the mixer. Then, after having transferred them in a large bowl, add the milk, stirring, until obtaining an elastic but firm dough; we say that the balls of the filling will not have to crumble; but not even squacquerare.

For a small amount housewife like that shown in the recipe I preferred to mix in the blender cup garlic, parsley and egg;

then adding the rest of the ingredients in the bowl.

Also in this case add the milk at the end, little by little, continuing to mix.
Leave the stuffing to stand for at least an hour.

Roll out the pastry with speck (until the third last and second last thickness, depending on type) or with a rolling pin; We must not in any case be too thin: we are not preparing tortellini!

Draw with pastry rings of eight cm discs
(the recipe that guaranteed me as original shows ten but, for my manual skills, a bit 'smaller are more manageable).

Place the filling balls on the discs,

brush them just on the edges and close them, folding them half-moon.

Wanting then to press the tines with a fork to weld them better and create a small decoration.

At this point you have to turn these crescents in real Scarpinocc: Fold the part with the filling on the outside edge ...

and then a slight pressure to the center, to hollow out and curl the ravioli ...

So continue until all of the dough and allow to dry ravioli for at least a couple of hours on a tray sprinkled with semolina.

The baking takes about seven or eight minutes. Drain them with a slotted spoon and serve with melted butter and sage passing aside the grated cheese.

If desired they can also be served, as in the picture, with the sauce of a braised meat or a roast.