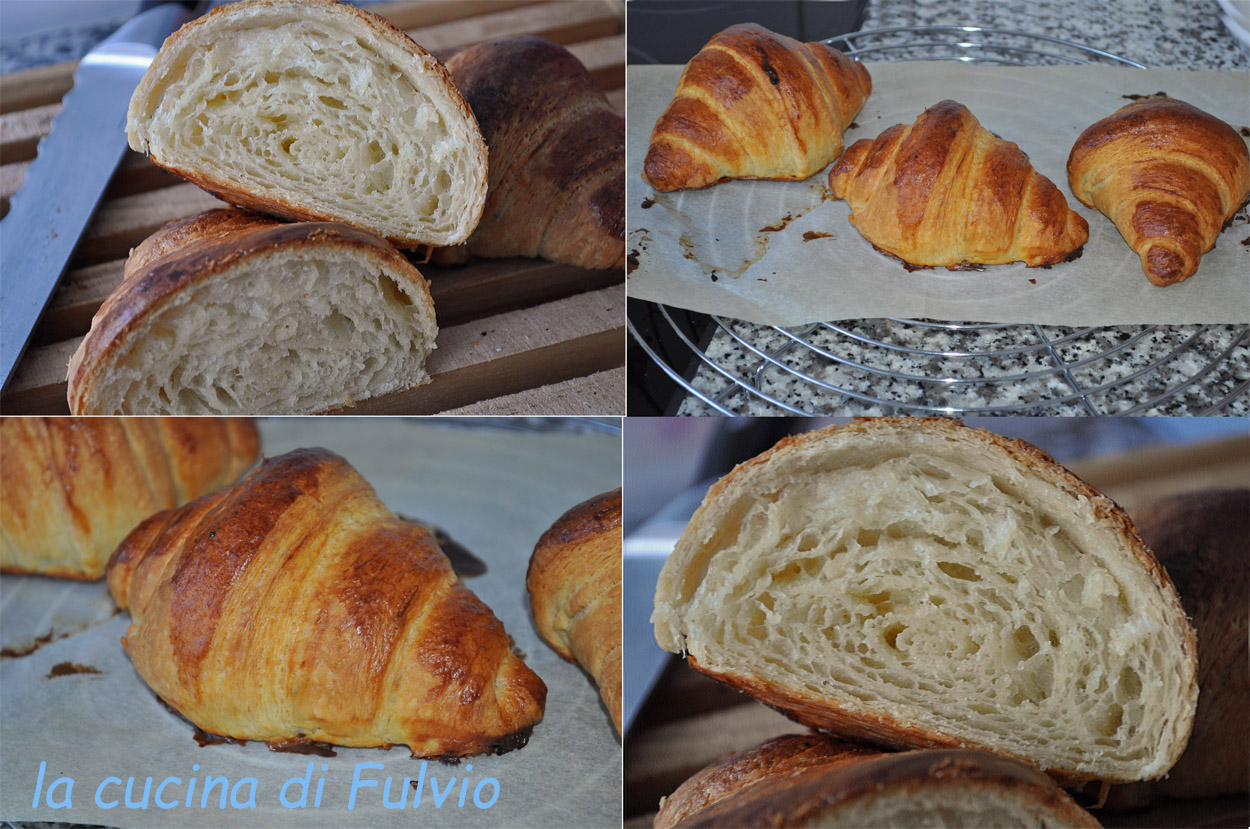 But, however ... for some time I have been preparing quick puff pastry with excellent results and recently I wanted to apply the technique of homemade pastry by Iginio Massari preparing croissants.

Since a swallow does not make spring, I have repeated it with different types of dough and the result has always been very satisfying.

Here I indicate the recipe for the dough I use for croissants classical;
if you usually use another one, that's okay!

Butter for browse - indicated in the ingredients - however, it is not encased in the dough but, as in the homemade pastry, incorporated into it.

I tried to be as precise as possible in the description and in the photos that accompany it; I am always available for those who want more information.

If we are all ready, starting as always with the ingredients, let's start kneading!

An hour before you start, cut the butter into cubes for sheeting, sprinkle it well with the flour and place it in the coldest part of the refrigerator.

In the meantime, prepare all the other ingredients: the 15 grams of butter that go into the base dough must be soft and at room temperature.

After an hour, pour all the ingredients into the mixer (excluding butter for puffing) in this sequence: pour all the water, dissolve the brewer's yeast, malt (or sugar) and two CTs. some flour.

It is important to use cold water to prevent leavening of the mixture prematurely!

Mix at low speed until a soft and elastic dough is obtained.

Now add the cold butter cubes and mix for another minute, maximum one and a half minutes:
the butter must not be absorbed by the dough but only just incorporated (the dough will appear lumpy due to the butter cubes scattered inside)!

Pour the dough on the work surface just dusted with flour and give it the shape of a brick.

Wrap it in a plastic bag and store it in the fridge, on the coldest side. (I put it on the veranda in winter: we are often around zero or below!).

After an hour, take the brick from the fridge and roll it out roughly with a rolling pin (the butter will tend to surface but it doesn't matter).

Roll out with a rolling pin, adding a little flour if necessary: ​​the dough will tend to stick; but that's okay.

Dust it with flour and give it a three-fold (the photos show how to do it).

Rotate it ninety degrees to bring the cuts out and roll it out again; dust it again with flour and fold it into four (that is: fold the two extreme edges in the center, overlapping them slightly, and then fold them back on themselves, like a book).

Always remember to rotate the dough ninety degrees each time with respect to the previous folds (in this way the buttery part will end up being imprisoned, allowing us to obtain the much desired peeling effect at the end!).

After this time and taken the dough out of the fridge and repeat the folding operation in three and then in four: the dough will now begin to have a more homogeneous and less lumpy appearance!
Give another hour to rest in the fridge.

Pick up the dough again and, this time, give two rounds of four folds (always remembering, after each round, to rotate the dough ninety degrees!)

Now the dough is almost ready to use! It only takes two hours to rest in the fridge, even better one night: I prepare it in the afternoon to use it the next day ...

At the time of use, as I also do with puff pastry, I can decide whether to use all the dough or whether to put a part in the freezer to use it, after a night defrosting in the fridge, again.

Remove the dough from the fridge one hour before starting to work it.

Roll out the dough until a rectangle with a thickness of 3 mm is obtained.

Cut it into long triangles ...

and roll up the triangles, lengthwise, starting from the base.

Arrange the formed croissants on a plate and brush them with egg yolk and milk, mixed together, and leave to rise (finally!) In a warm place for at least an hour: they must double in volume. The ideal is to wrap the plate in foil or a plastic bag.

Heat the oven to 220 °, static. Remove the plastic cover from the plate and bake the croissants for 20 '/ 25' until they take on a nice dark golden color.

Remove from oven and let cool on a rack.

Now they are ready to be devoured: smooth ...

... or stuffed (I like it a lot with cheeses and cured meats!)

Your comments are welcome!
Leave them in form at bottom of page: