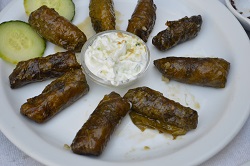 Who was in Greece can not but have tried the dolmadakia (ντολμαδάκια), Those stuffed vine rice rolls that are served, accompanied by tzatziki as appetizers or snacks.

Prepare them at home is not difficult, just a little 'patience:
I make them so.

Of recipes of leaves, which are of screw, or savoy cabbage, which exist in all cooking traditions, as for example the Romanian sarmale or Golabki Poles.

And yet in our kitchen you will find several examples of this type, like these cabbage rolls which prepares a friend of mine;
and the examples do not end up here, to have time and space to include them all.

But back to the Greek cuisine and these rolls.

Now we begin to prepare them!

As you can see, you do not need it!

And, for the preparation of stuffing, refer to the recipe of the two most typical fillings, listed below:

Prepare the stuffing that you prefer from those indicated:
in this preparation it is used that with raw rice.
Do not be stingy with the salt in the preparation of the filling: cook the dolmadakia in plenty of liquid, much of the salt will eventually dispersed.

In a container or on the working surface to have, well stretched, the vine leaves in brine
(commonly found commercially canned or vacuum but, if desired, may also be prepared at the time, having the leaves of fresh lives left:
just pass them for a few minutes in salted boiling water to soften them and use them right away).

At this point withdraw the first leaf and arrange over a spoonful of filling.
(I do it in a dish to avoid spilling stuffing everywhere ...)

Fold the end of the leaf over the rice filling and close the sides with the edges of the leaf.

Now roll up everything until you get a kind of cigar.

Arrange the rolls thus obtained, which gradually prepares them in a pan with the bottom covered with slices of potato or the broken vine leaves or too small to be used
(in this way we not will risk that sticking to the bottom of the pot during cooking).

Cover everything with white wine, place a plate with a weight on it to keep everything compact to prevent the rolls from opening during cooking (for example a pot full of water), bring to a boil and cook for about an hour.

At this point our dolmadakia are ready:
they can be served hot, warmed (even in the microwave) or cold and accompanied by their small cooking liquid and flavored with lemon juice or, better, by a nice bowl of tzatziki just made!

In addition to cooking indicated above, one can opt for cooking in the oven in a pan possibly using the filled with half-cooked rice. The preparation procedure is the same as for Stuffed Pumpkin Flowers.