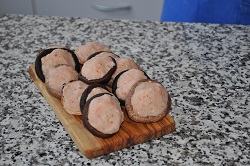 One thing that I really love in Chinese and Oriental cuisine is generally the wide variety of preparations that are presented on the table, especially when talking about the dimsum. And sometimes there is also a little secret that helps to increase the appearance and variety of these starters.

Take for example these typical dried mushrooms steamed with a delicate shrimp filling.

In this case, the small secret, already seen with the other preparations (meat, though) fried → and steam → It is in a filling also used for the shaumai! For the precision for shaumai shrimp: the filling is the same and, the only variation applied, was the omission of a whole shrimp for decoration.

Dried mushrooms, shitake, must be those dry, fragrant, unearthed for half an hour in warm water and deprived of the stem; the fresh ones, which also lend themselves to many other dishes, even Western ones, in this case they lack the particular aroma that makes this specialty completely different from the aforementioned ravioli steamed.

First of all, soak the mushrooms in plenty of lukewarm water; if the stems are easily detached from buckets, eliminate them. If not, then proceed with the help of a well-sharpened knife: after the first attempts, it will be perfect.
While the mushrooms are softened, prepare the filling: the will proceed is the same as described in the preparation of shaumai shrimp:
pour into the glass of the mixer onion, bamboo and fish, all already roughly chopped into pieces.

Transfer the filling into a container and begin, with wet hands, to form balls of filling more or less the size of a cherry.

Stuff each mushroom with a ball and stuffing. with a slight pressure of the fingers, it adhere flattening over the entire inner surface.

Switch the outside with a little olive oil and place them in the appropriate neighboring bamboo baskets: steaming, over a full pot of boiling water, it will take about fifteen minutes.

Serve accompanied by soy or a mixture of vinegar and soy sauce, to taste. For the delicate taste of these mushrooms, other sauces, spicy or sweet and sour, would not be suitable.