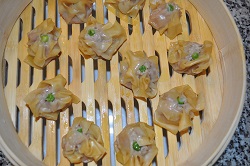 These saccottini steamed, reminiscent of the open ravioli, are a typical Chinese specialties.
They come in many types, often presented with the choreographies colorful;
I like everyone ... and when I have guests at home I often see them preparing them, even as an appetizer for an otherwise very lunch western.

In this case I prepared shaumai with a pork-based filling.
A filling that the vegetables and seasonings have made it very delicate and tasty.
And which among other things can also be used for other preparations, such as the famous wonton Fried:
and precisely the browse used It called for wonton pastry!

For one thing, since often sheets for wontons you buy frozen, remember to remove the package from the freezer an hour before. And, when to use it, open the upper covering it with a slightly damp cloth.
Prepare vegetables and meat passing gradually to the mixer; if the meat they are already been chopped from the butcher the task will be much easier.

Stir and then pour into the mixer the different seasonings and egg white and mix again.

Transfer the filling into a container.
Stretch a cloth slightly damp on the work surface and attach the few sheets (note: they dry out quickly!) Leaving the other in their package, again covered by the previous canvas.
With the hands, form balls of filling more or less the size of a cherry and arrange them to one for puff pastry.

Decorate the top of the filling, for example with a pea and then, by making a slight pressure on the edges of the sheet with the fingers of both hands to close the leg cover sheet, leaving the top open so as to allow one's decoration and part of the filling.

Steaming in the special brushed bamboo baskets before oil to prevent sticking shaumai.
Leave to cook for about 10 '/ 15' and serve them on the table in freshly cooked bamboo baskets. Serve them with some soy sauce on the side or, even better, with a mixture of half soy sauce and half vinegar.