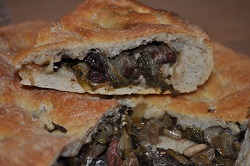 This preparation, like many recipes of this type, is called pizza.
But it is not that pizza that we are usually used to but a savory pie.

Unlike other cakes of this type this is prepared, traditionally with a dough leavened and not with a dough or a brisée dough.

It is typical, in the Neapolitan, of the Christmas period; along with many other traditional preparations.

And as for many traditional preparations there are many versions.

From the one with the bread dough to the less traditional one with a thin pizza dough.

Even the stuffing can be interpreted in many ways.

I sometimes use the simple one I also use for my panzerotti with curly endive, others the richer one I describe here.

So we just have to, starting as always from the ingredients, start cooking!

Clean and wash the escarole; then cut it into strips.

In a pan sauté the garlic with the anchovy fillets and then complete with raisins, pitted olives, capers and pine nuts.

Season with salt and season with chilli (more or less, according to taste) and cook over medium heat until the moisture of the escarole is dry.

Allow to cool well before continuing with the preparation.

Take half of the dough, spread it to the size of the pan.

Place it in the pan, just greased with oil or lined with parchment paper, adapting it to the edges.

Spread over the filling and then close it, after having spread it, with the rest of the dough sealing it well at the edges.

Leave to rise for an hour and in the meantime preheat the oven to 240 ° C.

Brush with oil, complete with a little salt and prick the surface to let the steam out during cooking.

Bake and cook in the lower part of the oven, static, for approx. 25 '(ideally on a refractory plane).

Remove from oven and allow to cool.

Serve lukewarm or even cold the next day