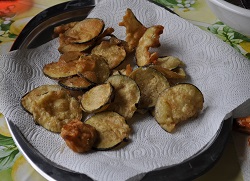 Here is another of those Greek preparations that can be offered to us both as a snack, as an appetizer or as an aperitif.
Or even as an after-dinner closure, together with a glass of rakis!

I have always looked for the perfect recipe to prepare these aubergines and, anyway, the answer I had was the same:
prepare them the same way as zucchini.
A great help, no?

In the end, between scraps of information, intelligence in other people's kitchens and experiments in my I got this recipe; It will perhaps not be the original one, but the result, according to my various diners, is impeccable.
Even with zucchini, precisely ...

A little note: the photographic sequence is not complete, I always forget to update it, make it up to the next frying.

Prepare the batter by mixing in a bowl, better with a whisk, water and flour; continuing to mix add egg, oil, brandy, salt and pepper.
Heat the oil in the fryer.

Dip the eggplant slices in the batter and then immerse them in oil hot beautiful (the ideal is to put them one at a time so they do not remain stuck - or just separate them immediately immersed).
As soon as they are well browned on both sides, drain them well and place them on a sheet of kitchen paper until they are all ready.

Sprinkle with salt and serve while still warm well: they are delicious!

Personally tested several times:
they also like children very much (avoid even say that it is vegetables ...)