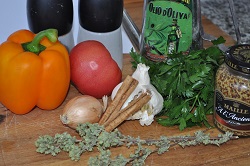 We all know gyros and souvlaki (if only for having already met them on this site!) But having tasted them to replicate them at home is not said that the result is what you hoped for:
we always miss, let's say, that certain taste of Greece...

How to get it?
The answer that all the cooks and the Greek cooks I knew gave me was always the same: the marinade, just that!
No matter what meat it is or what fire is used; the important thing is that the meat has undergone the right treatment to buy that certain nonsochè in taste.

As I have already described in an article of mine, I am placed myself in the kitchen of a tavern and I followed step by step preparation of gyros, while letting them explain me well all the secrets of their marinade.
Marinade which can be surely used not only for the gyros but for the souvlaki, too.

At home I replicated it and tested it thoroughly. It's perfect.
Here's how to prepare it, starting from the ingredients:

For about a pound of meat:

The real preparation is very simple, basically it is a nice shake of vegetables and spices!
Cut the vegetables into large pieces and put them in the blender tumbler (see note) Along with other herbs and spices.

Complete by adding the olive oil and blend thoroughly.

The marinade is ready for use: transfer to a container (it keeps two or three days in the refrigerator) and withdraw the necessary to marinate the pieces of meat.

Here the marinade has been used to marinate the chicken leg cutouts for small souvlaki to do on the grill.

As soon as the souvlaki are ready, slide the meat from the skewer in the pita, complete with vegetables and sauce, close your eyes and taste:
It will seem to be on the Aegean sea shores.
Bon appetit!