The focaccia from Bari,
a personal reinterpretation 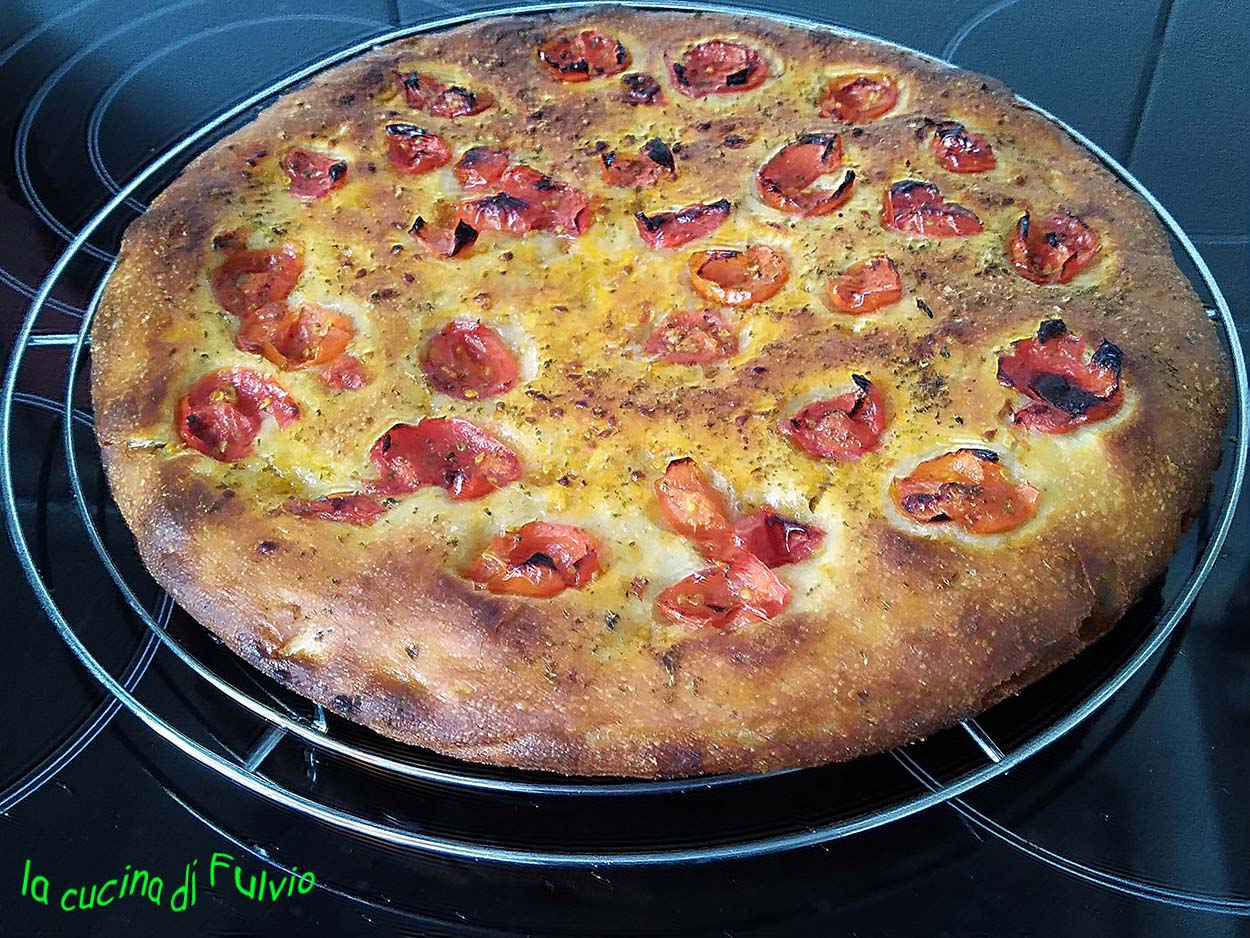 A symbol of the cuisine of the city of Bari is certainly the typical focaccia.
More or less high (or more or less thin) and covered with cherry tomatoes and olives (or just cherry tomatoes).
Certainly well seasoned with the excellent local oil and with a mixture of flour ... and here we have to discuss:
each bakery has its own version, some using only flour and some using potatoes as well; others use a part of semolina.

In order not to be mistaken, I have taken a good look at myself as Antonio Fiore prepares it, of the homonymous bakery in old Bari, and I tried to repeat it as I could.
I clearly had to adapt the recipe to the ingredients and the oven I have available and I can guarantee that, although good, it is not like hers; but I kept the ratio of 75% between water and flour to ensure the same consistency.
Those who have had the opportunity to eat these focaccias on the spot, several times and in different ovens, assure me that tasting this version of mine brings them back to those places anyway ...

We just have to prepare it together, starting as always with the ingredients!

Dissolve the yeast in about a third of the water in the mixing bowl.

Add three CTs. of the total flour, already weighed and sifted, mix and leave to rest for about ten minutes.

After this time, add half of the remaining water and the rest of the flour mixed with salt and malt.

Start mixing by adding the oil and gradually the other water until it runs out.

Knead until a homogeneous mass is obtained and then let it rise for a good half hour at room temperature in a closed container.

Then transfer the dough to the refrigerator for at least four hours (I knead in the evening and, after a night in the fridge, I continue the following morning.

Remove the container from the fridge and wait an hour for the dough to return to room temperature.

Work it gently and form a ball to be spread out in a generously oiled pan.

Gently spread the dough until the entire pan is filled by pressing on the entire surface with your fingertips.

Massage the surface with more oil and season with the chopped tomatoes and their liquid.
Decorate, if desired, also with olives (better rattle them off, please!) and season with salt and oregano according to taste.

Let it rest at room temperature for half an hour and, in the meantime, start heating the oven well to 250 ° C in static mode.

After half an hour, bake on the lowest shelf, possibly placing the pan on the refractory surface.

Cook for 15 'and in any case until the focaccia is completely colored.

Remove from the oven, slide out of the pan and allow to cool on a wire rack.

Your comments are welcome!
Leave them in mine Facebook page or in the form at the bottom of the page:

Here you can help improve it
RSS Feed