The fast pesto to the blender,
tradition and technology ...

Although I do not miss pestles and mortars of all kinds, materials and sizes in my home, it is always the case that I miss the time to prepare a good quantity of pesto following the certain path of tradition.
For example, when the amount of basil available is decidedly abundant:
and here comes the blender for more preparation tecnologica! 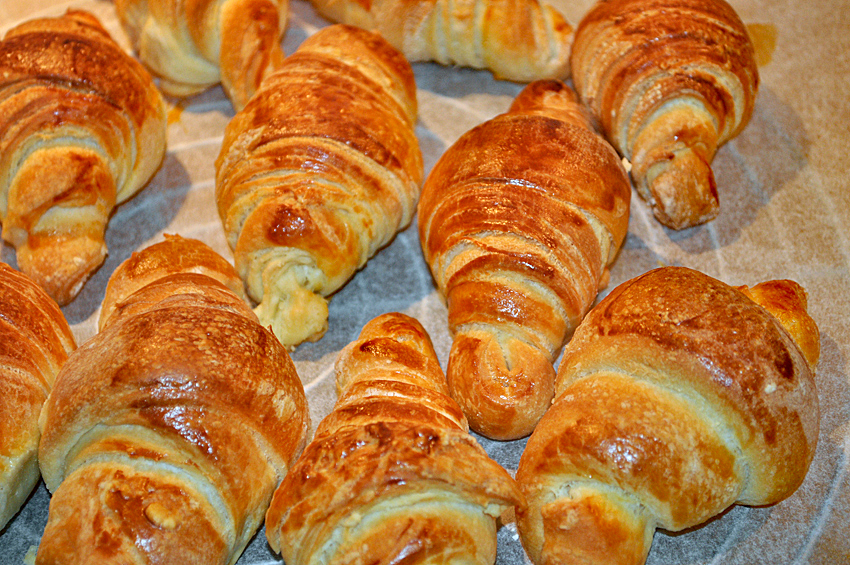 Why ever define croissants smart?!?
It is easy to say: this is a homemade recipe to allow even a lazy person like me to prepare some croissant (let's call them this ...) that they are good, good looking and, especially, not too complicated to prepare!

And whether they are good for breakfast, snack or snack; smooth or stuffed, with something sweet or salty.

First of all, the basic dough is not the classic one but simply that of the typical Swiss Sunday bread:
the braid with butter, here a recipe.

And still on the subject of laziness, to avoid the infinite rounds of folds I limited myself, first in one direction and then in the other, to rolling the dough on itself well enclosed on a heart of handled (and not laminated) butter. and allowed to cool).

The result is not absolutely professional but, in any case, they really like it and always sell out!
... and that's enough for me

First we prepare the dough without letting it rise (it will rise at the end of preparation).

In addition to the usual recipe for the Bernese braid, here in the ingredients I propose the one that my garden neighbor prepares and which, I must say, is truly superb
(You will find the recipe here when I have time to photograph it step by step).

We roll out the freshly homogeneous dough to a thickness of not less than two centimeters ...
and to make things easier we use a handled butter (25% flour) without rolling.
We place it in the center of the thickly spread dough and close it inside.

First by folding the long edges in the center and then sealing with the short ones.

Once this time has elapsed, it is spread out roughly, even with the hands, just enough to fold it on itself, first in one direction and then in the other.

Then, with a rolling pin and trying to obtain a fairly regular rectangle, it is rolled to a thickness of about three millimeters ...

... before obtaining triangles of dough to roll up to form croissants.

(here I make a small note: it can also be rolled out in a circular shape and then cut into wedges.


And if you are unable to stretch up to three millimeters ... let's face it!
when rolling the triangles we will try, by pulling and pressing, to flatten them and stretch them as much as possible)

Once the croissants are formed, brush them with egg and milk, cover and leave to rise for a couple of hours (they must double in size) and bake in a preheated oven.
(210 ° C, static oven, 20 '/ 25')

As soon as they are ready, remove them from the oven and let them cool on a wire rack

They are good both just (almost) baked and even later; always and in any case warmed up (I like them that way!)

Your comments are welcome!
Leave them in the form at the bottom of the page:
{Jcomments on}