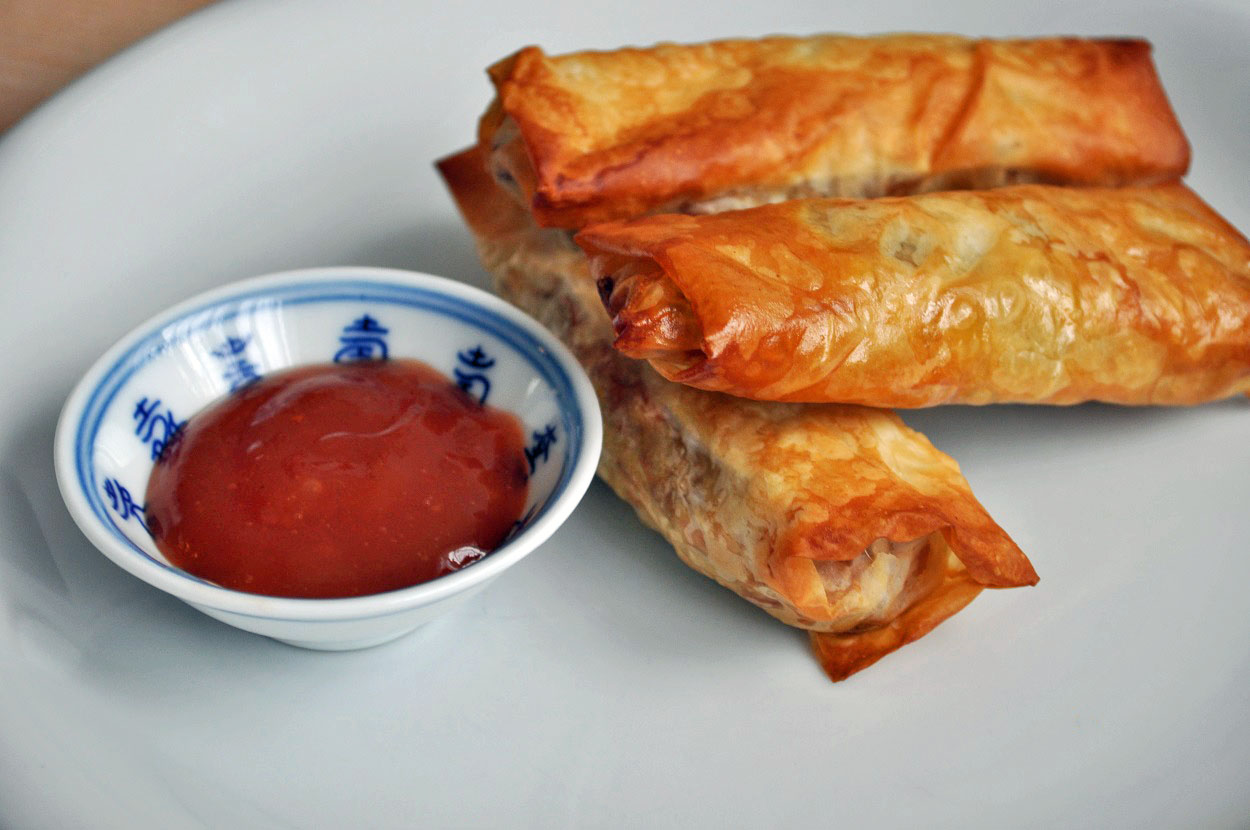 I love the spring rolls; and as always, you can say, I prefer prepararmeli on my own!

This is the version with filo pastry and, to avoid frying, with baking.

The result is very pleasant and extremely light:
Try it!

Clearly these rolls can be fried, like those prepared with traditional puff pastry.
Everyone adjusts as he pleases: in the summer I often cook on the veranda and there fry does not bother me.
But in winter. at home, even with the maximum suction ... better than the alternative to the oven!

Whisk an egg salting just an idea with salt and soy sauce.
Distribute it very well in a large frying pan, already brushed with a little oil, reduce heat and cook a couple of minutes because it congeals.
Transfer it to a cutting board and just roll it up and cut into strips.

Slice all the vegetables into thin strips (or, as i write masters, to the julienne) Including Chinese mushrooms soaked and stem private.
Fry in a wok, at fairly high heat, the onion with the pepper and bamboo.
Then add the mushrooms.

Stirring constantly add the egg strips, carrot and, for the past, the bean sprouts.
Season with salt and pepper, season with soy sauce and after a minute remove from heat and set aside to cool in a colander to remove any excess moisture.

Open the package with the sheets of filing paper and keep them covered with a slightly damp cloth. Take the first sheet, covering the rest again with the cloth, and place it with the vertices on the sides and up and down, like a lozenge, on another slightly damp cloth.
in the photos the sheets have been halved because I didn't have enough for all the stuffing :-(


Place a little cold stuffing at four or five centimeters from the upper vertex, leaving enough fillo dough enough to fold it over the filling.
Lift the top end of the sheet and fold it to cover the filling.

Roll towards you towards the middle of the sheet.

Fold the outer sides over the part of the roll already formed and brush with a little water and cornstarch mixed to better seal the roll.

Finish rolling up to the end of the sheet.

Spray with a little oil on all sides and bake immediately in a ventilated oven preheated to 200 ° C for 15 '.
If possible, place them on a mesh container to facilitate air circulation; otherwise on a sheet of parchment paper.

Turn halfway through cooking to get them golden and crunchy on all sides.

The rolls are ready!

serve them hot with a soya sauce and, for those who like a agropiccante sauce

Your comments are welcome!

Leave them in the form at the bottom of the page:

I've joined your feed and look forward to seeking more
of your wonderful post. Also, I've shared your website in my social networks!
# Neil 2020-04-13 20:27
This blog was ... how do I say it? Relevant !!
Finally I have found something that helped me.
Thanks a lot!
# Billie 2020-04-13 21:01
Fantastic blog! Do you have any tips and hints for aspiring writers?
I'm planning to start my own blog soon but I'm a little lost on everything.
Would you advise starting with a free platform like Wordpress or go for a paid option? There are so many choices out
there that I'm completely confused .. Any suggestions?

Many thanks!
# Kellye 2020-04-13 22:25
Since the admin of this web page is working, no hesitation very quickly it will be famous,
due to its feature contents.
# Sara 2020-04-14 02:12
You actually make it easy with your presentation but
I find this topic to be actually something which I think I would never
understand. It seems too complicated and extremely broad for me.
I am looking forward for your next post, I'll try to get the hang of
it!
# Lizzie 2020-04-14 04:58
Pretty! This was an extremely wonderful article.
Many thanks for supplying this info.
# Maxine 2020-04-14 04:59
Greetings! I know this is kind of off topic but I was wondering which
blog platform are you using for this website? I'm getting fed
up of Wordpress because I've had issues with hackers and I'm looking
at options for another platform. I would be great if you could point me in the direction of a good platform.
# Tosha 2020-04-14 06:28
It is not my first time to pay a visit this site, i
am browsing this web site dailly and obtaining nice information from here every day.
# Leandro 2020-04-14 07:08
I read this piece of writing completely regarding the comparison of
most up-to-date and earlier technologies, it's awesome article.
# Amber 2020-04-15 05:40
What's up mates, good paragraph and nice arguments commented
at this place, I actually enjoy by these.
# Joey 2020-04-15 13:31
Greetings, I believe your website may be having internet browser compatibility issues.
When I take a look at your website in Safari, it looks fine however, if opening in IE, it's
got some overlapping issues. I simply wanted to give you a quick heads up!
Aside from that, wonderful website!
# Elmo 2020-04-27 02:57
You are so cool! I do not think I have read through anything like that
before. So good to find somebody with some original thoughts on this topic.
Really .. thanks for starting this up. This website is one thing that is needed on the web, someone
with a bit of originality!
Refresh comments list
RSS feed for comments to this post.
JComments