The special version of the calamarata!

Taking advantage of a day across the Alps, in Italy, I had seized the opportunity to redo the supply of calamarata pasta.

Clearly, just at home, I wanted to present it on the table in a more version rich than usual; and then I added some nice prawns to the sauce.

Needless to say, it was much appreciated ... 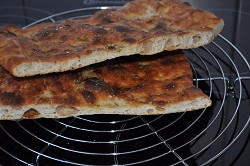 When the desire to knead, by hand or machine, is little or nothing, the ideal solution for many leavened products is the technique without dough, precisely no-knead.

And, since a friend asked me if I could show her this system step by step, I patiently photographed and commented on it.

Here I used it for a focaccia with 100% of white spelled flour.

Typically spelled requires a good percentage of water, over 70% of the weight of the flour; I kept myself just below for a successful photo and fortunately the focaccia is equally out of perfection!

The purists will tell me that, since there was no leavening in the pan, this is not a cake ... I'll make a reason.

Put the sourdough, brewer's yeast and water in a bowl.

Mix well, add the olive oil and then the flour mixed with salt; mix with a spoon for about thirty seconds until the water is completely absorbed.

Do not give weight to any remaining lumps.

Cover and leave to stand for an hour. (I use the fridge in the cockpit of the beers ...)

This period of rest will allow the gluten to develop and the yeast to begin its work.

After this period, with the same spoon used to mix, give folds to the dough (which is nice sticky) without removing it from the bowl: that is, lifting it from below and bringing it to fold over the rest.

Working from the four sides of the bowl a couple of times a good bending effect will be obtained; it's more complicated to tell it than to do it: that's why I put the pictures!

Cover and leave to stand in the cool from thirty to sixty minutes; then repeat the operation.

Even up to three times.

At this point the dough will begin to be more manoeuvrable.

Flour the work surface and turn the bowl over so that the dough comes out.

Make the folds according to your own technique (for example one flap over the other, turn of 90 °, fold and then collect to ball - pirlare they tell me from the direction).

Cover and allow to rest, now at room temperature, from thirty to sixty minutes; then repeat the operation a couple of times: they should be sufficient to obtain a mixture that is quite simple to handle.

If you want to use it quickly enough, let the leavening continue at room temperature; otherwise, better, let it rest in the cool for one night: the morning after the dough will be perfect!

Then spent the night, immediately turn the dough on the floured surface and give another round of folds. Then let it rest there, covered (I use a tea towel held in place by the inverted bowl ...) for at least an hour: it must return to room temperature.

Meanwhile, heat the oven to the maximum: the ideal would be to have a nice refractory bottom on the bottom but, at the ends, an upturned and hot baking pan will be good to give a good blow of heat at the beginning of cooking.

Oil a baking dish and, since it is not a sin and the dough is still quite moist, instead of the pan just oil a sheet of baking paper lying on the bottom of the pan.

Gently spread the dough with your hands and pull it to the edges until you reach (and a little 'overtake, the size of the pan.

Lay it out on baking paper and decorate it as you like ...

here it was brushed with EVO oil. crushed a little 'around with the fingertips and sprinkled with rosemary and salt.

A sprinkling of water and then immediately in the oven.

Using a refractory top, it may be worthwhile to let this part of the cooking continue on the stone.

And now you can churn out!

The time that is cooled enough to not burn yourself and you can start to bite it.