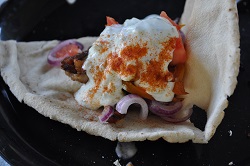 Sometimes it happens to abound generously with the quantities of meat I put on grilling;
and something must be, advances ...

But everything can be recovered and reused:
with meat already cooked you can make a salad, a cold appetizer or, as in this case and with a skillful knife job, a tasty imitation of Greek pita gyros!

Some gyros pita(γύρος πίτα) - true and original ones, not my pale imitation - I have already spoken thoroughly in this mine short article showing step by step the work of the cook (professional) who prepares them, from cutting meat to marinating and cooking to prepare the dish or pita to consume booklet, as street food.

The quantities are at the discretion and brings to the table, basically, what there is.

Here, skip all the preparatory phases, take the slices of meat left over from the grill of the day before and if they are made of thin strips that recall the pieces of meat that are cut away from the spit of the gyros.

An abundant sprinkling of oregano never hurts, especially if the original grill had undergone a different spiciness.
I also add a bit of cinnamon.

After about ten minutes to flavor, you can begin to blow up the meat in a pan (or as here in a wok) over high heat with a little oil.

Cooking, quite short because the meat is already cooked, must serve to heat it up and make it crispy; such as meat that is cut gradually from the gyros spit.

On the table they prepare the pita bread, heated in the oven or, if turned on, on the grill, and bowls with tzatziki (τζατζίκι), tomatoes with peppers and onions, all sliced, salt and pepper for those who want them and a nice tin of sweet paprika.

Normally they use raw peppers but ... they were advancing in the fridge of mine peppers to the sour and those were used!

Now everyone can make their own pita as they please, those with little meat and those with lots of it;
and seasoning then with vegetables, tzatziki and paprika if desired.

The gyros pita is ready: you just have to bite into it, enjoy!