Some of the recipes I prepare at my home and also at friends' homes.
Plates I liked and learned to prepare, adapting to my taste and needs.

Ma ... attention:
my recipes are in my own way and they don't necessarily respect traditional canons;
also because, on certain classic preparations, each village and each family have their own original version!
On this page, from day to day, a new or revised recipe may appear;
but also the story of a lunch prepared or eaten in company.
Just like some curiosity ...

The recipes that I love as I prepare them at home. And all the systems I use to make life easier in the kitchen! 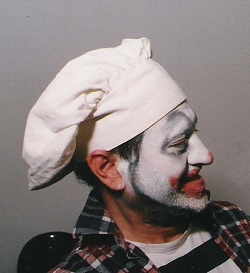 My recipes ... They are the ones I prepare at home and sometimes at a friend's house.
These are dishes that I liked and that I learned to prepare, adapting them to my taste and my needs.
But ... be careful! My recipes are "my way"!

In this section you will find my "light" recipes that are gradually published:
Come back often to this page, it is constantly evolving!

Spaghetti with clams to sea by Vincenzo Buonassisi

Years ago I found in the Small code pasta Vincenzo Buonassisi this nice recipe:
Spaghetti with clams at the sea

Recipe which, as explained Buonassisi, clams only recalls the flavor because, on the other hand, there is no trace of clams: son remained in fact the sea!

It was a dish that intrigued me a lot; I tried it ... and since then is an integral part of my proposals for the table.
Especially when it comes to put on the table a simple but tasty dish at the last moment.

There are several versions. What follows is precisely that described by Buonassisi.

Spaghetti with clams at the sea

500 gr of spaghetti, 100 gr of butter, six fillets of salted anchovies, 60 gr of olive oil, two cloves of garlic, 200 gr of tomatoes, parsley, salt and pepper.
Softened butter, clean, desalted, finely chopped anchovy fillets and mix the softened butter with the chopped anchovies so you get a smooth mixture that you can keep for a long time in the refrigerator until ready to prepare the dough. Came this time heat the oil with the garlic cloves crushed garlic imbiondisce and when you put in the pulp of pureed tomatoes or peeled schiaccerete that the bottom of the pan. Let cook a few minutes so that the sauce reaches the right point and season with salt and pepper.
Remove from heat and add a handful of chopped parsley. Meanwhile, the spaghetti will be cooking. Final operation: place the mixture of butter and anchovies on the bottom of the tureen, pour over the spaghetti cooked al dente in plenty of salted water, stir, pour over the tomato sauce and stir again.

(from: The small number of pasta, Vincenzo Buonassisi, BUR, Milan, 1973)

See also: A deception to the taste of the sea!

Your comments are welcome!
Leave them on my Facebook page or in the form at the bottom of the page:

In my own way

Here you can help improve it
RSS Feed